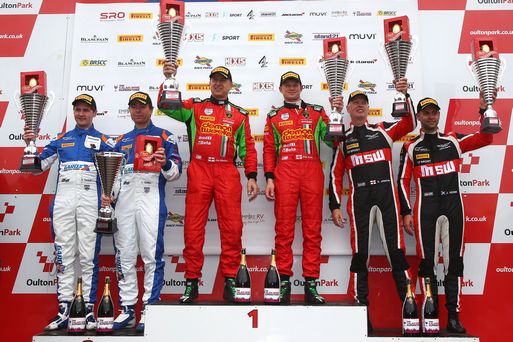 
Following on from their success as runners up in last year’s British GT championship, Jon Minshaw and Phil Keen made a noticeable return to the top step of the podium following a blinding start from Minshaw, who led race one from before the first corner. Co-driver Phil Keen went on to take the chequered flag having extended his lead to more than 30 seconds over the sister Barwell Lamborghini Huracan GT3 of Sam Tordoff/Liam Griffin, as Tordoff made his British GT debut last weekend. The 1-2 race finish for Barwell Motorsport is the first in the team’s Lamborghini era, and to cap off a very strong opening event of 2017, Demon Tweeks-backed Minshaw and Keen went on to claim victory in the second race of the day as well. These results put Barwell Motorsport at the top of the 2017 Teams’ championship, with Minshaw/Keen taking a clear lead in the Drivers’ standings. Unfortunately the GardX-supported Huracan GT3 of Tordoff and Griffin was forced to retire from the second race due to a loss of power, whilst Sam was challenging for second place.

With Jon Minshaw and Liam Griffin qualifying P2 and P4 respectively for the British GT Easter weekend opener, the drama of this prestigious series quickly unfolded as the #24 Aston Martin who was splitting the Huracan GT3 duo, failed to move off the grid, bellowing with smoke. At the start of the first 1-Hour encounter it didn’t take long for Minshaw to launch his attack on Parfitt’s Bentley, moving the Demon Tweeks Lamborghini into the lead before reaching the first corner. Whilst Griffin, aboard the GardX liveried Huracan, had his sights set on the Bentley whilst being chased by Mark Farmer in the TF Sport Aston Martin.

Minshaw’s lead continued to over 18 seconds, having consistently recorded lap times over a second quicker than the rest of the field, before handing over to Phil Keen. Over the remaining minutes, Keen grew his advantage to an impressive 38 seconds before the chequered flag fell, giving the driver pair – now in their sixth year together - their first win of the season. There was further celebration as team-mate Sam Tordoff, making his British GT debut, followed Keen over the line; Tordoff’s impressive move on the exit of the chicane ensured he snatched P2 from the #31 Bentley – now driven by Seb Morris. The epic finish gave Surrey-based Barwell Motorsport the top two steps of the podium for the first time since switching to the 5.2 litre V10 Huracan GT3 last year. They were joined on the podium by 2016 British GT champions Jonny Adam and Derek Johnston.

Replicating their achievement seen at Snetterton last year, Phil Keen and local-man Jon Minshaw went onto take a double race victory in the #33 Lamborghini, despite their 10-second success penalty from race one. Whilst Keen got the better of the #31 Bentley at the start of race two, Tordoff slotted into fifth behind the Aston Martin of Jon Barnes. An incident between the two Team Parker Bentleys, which resulted in a drive-through penalty for Seb Morris, gifted Tordoff P3, creating a 3-way scrap for P2 with the two TF Aston Martins. Unfortunately Sam Tordoff, who had closed the gap right down to 2/10ths of a second, then suffered a loss of power which forced him to surrender P3 and he pulled off the track onto The Avenue straight. A premature end to the 1 hour race was caused by an incident between the Mercedes of Neary and the #7 Bentley, resulting in several laps under the safety car before the red flag was brought out with five minutes still on the clock. Keen and Minshaw therefore go into round 3 of British GT with maximum points (50 each), which will take place at Rockingham on the 29th/30th April. Minshaw was also awarded SRO’s Gentleman Driver of the Weekend Award. Barwell Motorsport currently lead the team’s championship by ten points over TF Sport, with a total of 68 points.