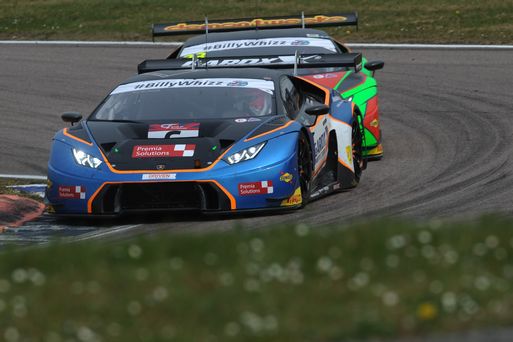 04 May 2017 Barwell takes Rockingham Team of the Weekend Award


Barwell Motorsport proved itself the real winner at Round 3 of the 2017 British GT championship last weekend, held at Rockingham Motor Speedway. The disrupted race, which saw no less than three appearances from the safety car, drew to a climactic end with the #6 Gardx liveried Barwell Motorsport Lamborghini of Sam Tordoff and Liam Griffin finishing P5 just behind Phil Keen and Jon Minshaw’s Demon Tweeks backed Huracan GT3, after a lengthy battle for the third podium step between both Lambos and Jack Mitchell’s Aston Martin. Sunday’s success means Keen and Minshaw continue to lead the driver’s 2017 championship having amassed 68 points each over the first three rounds. With both crews finishing in the top five, Barwell Motorsport secure a further 33 points from Rockingham which extends their lead in this year’s team standings to 28 points ahead of rivals TF Sport. The Surrey-based team also took home the Professional Motorsport World Expo Award for Team of the Weekend after Saturday’s impressively rapid engine change on car #33, enabling Minshaw to start from the second row alongside teammate Liam Griffin.

After qualifying P3 and P4, Sunday’s second row lock-out for Barwell Motorsport had disbanded by the first corner, Liam Griffin finding himself back in 8th, and Jon Minshaw moving up to 2nd, closely followed by Littlejohn’s Macmillan Racing Aston who had started from 8th on the grid. Minshaw’s early move on Mark Farmer at the entry to Chapman Curve meant the two TF Astons were split, and he could now launch an attack on pole sitter Derek Johnston. Whilst Minshaw had halved the gap to P1 by the start of lap 2, frustration was felt by Griffin who found himself at the end of five-car traffic led by Farmer in the #11 Aston before the first safety car of the session was deployed. Upon the restart, it was Griffin who shone, lapping quicker than all seven leading cars.

In a race that was shaping up to be dominated by Aston Martin, Minshaw showcased the traction of the #33 GT3 Lamborghini by continuously defending himself against Littlejohn. Less than twenty minutes in, and the race leaders were covered by just half a second; Minshaw pushed Johnston wide coming out of Gretton before going around the outside at Turn 4 - a great move which was shadowed by Littlejohn in the #24 Aston, before roaring down the start/finish straight, Minshaw now in the lead. Soon after, a battle for 6th had ignited with Griffin finding himself in a tussle with Duncan Cameron’s #21 Ferrari and Lee Mowle in the #30 Mercedes.

Unfortunately, Minshaw was forced to give in to the pressure of silver-graded Littlejohn in the #24 Aston on the entrance of Deene – 22 laps down. By the time the second safety car made an appearance 9 laps later, the gap between Minshaw and Littlejohn was over 6 seconds, but the safety car session meant the pack bunched up once again with two GT4 cars wedged between Littlejohn and Minshaw - now followed closely by Parfitt in the #31 Bentley GT3. Over the following 9 laps Minshaw managed to build a sizeable gap between himself and Parfitt, but Littlejohn’s pace proved too much for the bronze driver. Littlejohn had built the lead back up to almost 8 seconds before Phil Keen took over #33 for the remaining 57 minutes, having served a 20 second ‘success’ penalty for their victory at Oulton Park two weeks previous.

Griffin stayed out for an additional lap, one of the few cars that did not dive into the pits at the earliest opportunity; with no pit stop penalty to serve, Tordoff emerged in the #6 Lambo P5 ahead of Phil Keen driving the sister Huracan GT3, now in P6. With both Tordoff and Keen having completed nearly 20 laps each and 30 minutes remaining on the clock, the focus had shifted onto the unfolding battle between the two Barwell Lamborghinis for P4 - just over half a second separating the two 5.2 litre V10 machines. It wasn’t until the safety car retreated for the third time that Phil Keen saw an opportunity to pass teammate Tordoff, moving up the inside of him over the start/finish line, only to find himself trapped behind the lapped Bentley of Callum Macleod. Once finally past Macleod, Keen and Tordoff – split by just 3/10ths, joined the #24 Aston now driven by Mitchell, in a tussle for P3. Tordoff, who made his British GT debut at Oulton Park, spent the final laps scrambling over the back of Keen’s car in a desperate attempt to reverse his teammates earlier manoeuvre, however Keen was successful in keeping the ex-BTCC racer in his rear view.

As the trio approached the chequered flag, Keen lunged down the inside of Mitchell’s Aston in an unsuccessful but nonetheless dramatic final bid to snatch a position back, finishing inches behind. Keen took P4 – the only car to finish top 5 with a success penalty, whilst Tordoff finished P5 behind the #21 Spirit of Race Ferrari, #31 Team Parker Racing Bentley, and #24 Macmillan AMR Aston Martin. Whilst Barwell have enhanced their lead in the team’s standings for 2017 with 101 points, Phil Keen and Jon Minshaw continue to lead the driver’s standings with a total of 68 points each. Phil Keen who already holds the British GT lap record at Rockingham, also received the Sunoco Fastest Race Lap Award, whilst co-driver Jon Minshaw proved himself to be the quickest Am driver on track this weekend.