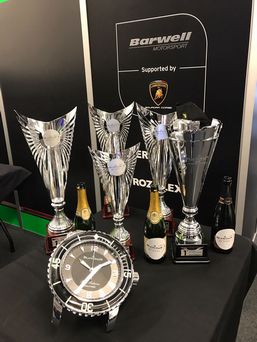 Barwell Motorsport enjoyed a hugely successful race weekend on home soil at Silverstone, where we took the Pro-Am race victory in the main Blancpain Endurance 3-Hour race with the #77 Adrian Amstutz/Martin Kodric/Patrick Kujala Lamborghini Huracan GT3, as well as two wins for Jon Minshaw in the GT Sports Club sprint series. The sister Blancpain Endurance #78 car of Leo Machitski/Miguel Ramos/Richard Abra also featured very strongly, running in second place and eventually claiming fifth spot in Pro-Am. These results mean that we are currently lying in 2nd (#77) and 11th (#78) place respectively in the Blancpain Drivers Championship and 2nd in the Teams standings (out of 13 teams) after two rounds. Despite missing the first race of the series, Jon Minshaw is lying in 3rd place in the overall GT Sports Club points, after taking a maximum score from Silverstone.

Adrian Amstutz started the #77 Huracan second in Pro-Am and 7th overall on the 55-car grid, after a brilliant performance from young Finn Patrick Kujala in qualifying. However, the Amstutz Produkte-supported Lamborghini was hit off the track by a Pro class Mercedes during the opening lap which dropped it back to just outside the top 40 overall. But the Swiss pulled through with a great recovery drive, during which he enjoyed an exciting battle with team-mate Machitski, with the two of them swapping positions several times as the Barwell crew watching held their collective breath!

Adrian hauled the distinctive yellow and black machine back up to ninth in Pro-Am before pitting to hand over to Croatian youngster Kodric. Some impressive pit work from the Barwell wheel-change crew gained a couple of places during the stops, and then Martin drove an absolutely storming stint to take the #77 Lamborghini into the Pro-Am race lead with a 15-second advantage over the second placed Aston Martin. Finally, it was the turn of Patrick Kujala, who, despite being held up by backmarkers several times during his stint, increased this impressive lead and was comfortably bringing the car home as the clock ticked down to the final 10 minutes. Then there was a lot of noise on the team’s car to pits radio, as with only three laps left he was knocked into a spin by a wayward lapped car, which amazingly he recovered from with his lead still intact but now under a second ahead of the Aston! Patrick drove an incredible last two laps under immense pressure but didn’t put a wheel wrong as he secured the top spot at the chequered flag.

The Vimetco Extrusions/Vodafone-backed Huracan GT3 of Machitski/Ramos/Abra also had an incredibly strong race, and might well have been fighting it out with its sister car for the Pro-Am win, had Ramos not been punted into a spin whilst running in 2nd place during the middle stint. Leo came out on top of his little inter-team fight with Adrian, and then the team’s engineers made a great strategy call to bring him into the pits earlier than planned to benefit from a Full Course Yellow period 50 minutes into the race. A lightning fast re-fuel and wheel change procedure in the pits combined with the clever strategy move, to elevate the #78 machine up to second place after the stop, with Miguel Ramos now at the wheel. The Portuguese driver got his head down and immediately started to make big inroads into the gap up to the Pro-Am leader, which he was destined to catch comfortably until a Ferrari rudely knocked him off the track and cost the Barwell car 30 seconds in lost time. This dropped him back to 7th place but Miguel managed to claw one spot back before handing over to Richard Abra for the final hour.

Richard then took up the cudgels and carried on Miguel’s good work, moving the red and black Lambo up to fourth position half way through his stint. During the remainder of the race Abra enjoyed quite a few tussles with rivals as he fought it out with three other cars for the 4th-6th placings. After coming out on top of a great scrap with the Raton Racing Huracan of reigning Lamborghini Super Trofeo champ, Dennis Lind, Richard landed fifth position and a good points haul for the #78.

Meanwhile our first foray into the GT Sports Club championship, designed for Bronze graded amateur racers, was flawlessly successful after some virtuoso performances from our very own British GT points-leader, Jon Minshaw. He woke up the rest of the series drivers after his first flying lap in Free Practice on a wet track was over seven seconds quicker than the next fastest! Minshaw showed his wet weather prowess to good effect again in official qualifying, where he put the Demon Tweeks-backed Huracan firmly on pole position by a good margin.

Both races were dry, however, and absolute corkers. In the first 25-minute encounter, Jon resisted race-long pressure from fellow Lamborghini pilot, Cedric Leimer, to take an impressive debut victory. Then in the 40-minute race the pattern was the same, until Karim Ojjeh’s BMW M6 GT3 came to join the party and made it a titanic three-way battle for the win. Minshaw was holding them both off until Leimer was given a 30-second penalty for multiple track limits transgressions (so was out of the hunt for victory), whereupon Jon let him through and concentrated on Ojjeh. These two had a great battle during which the BMW driver got past at one stage, but only a few laps later Jon pulled off a great move to retake the lead and bring it home to the flag.