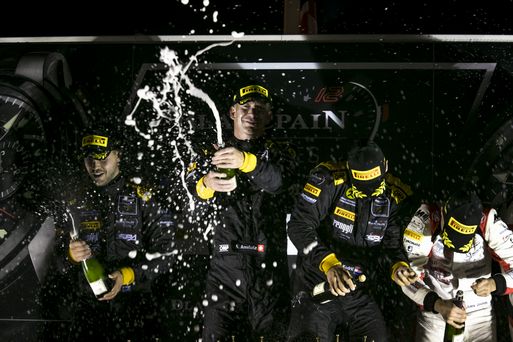 
Barwell Motorsport took their second victory in as many races, as the #77 Lamborghini Huracan GT3 of Adrian Amstutz, Martin Kodric and Patrick Kujala took another win in the super competitive Pro-Am class in Blancpain GT’s Endurance Cup. Patrick Kujala took the chequered flag for the Amstutz Produkte-liveried Lambo after 6 grueling hours of racing at the picturesque and very hot Paul Ricard in the South of France; the battle for the lead was reminiscent of the one seen at the preceeding Silverstone event, where we fought hard with the TF Sport Aston Martin for most of the race.

The #77 trio finished an impressive 12th overall out of a packed 58-strong grid (which includes over 30 Pro-Class cars), and was also the first Huracan GT3 home outright . Meanwhile, the #78 crew of Leo Machitski, Miguel Ramos and Richard Abra claimed their second successive points-scoring finish, as they battled their way to eighth place in Pro-Am. The double points finish for Barwell means we have consolidated our second place in the Teams Championship, and have moved to within just eight points of the leaders after three rounds.

The next round of the Blancpain GT Series Endurance Cup is the demanding 24 Hours of Spa, where the team hopes to turn its two triumphs into a hat-trick. The Total 24hrs of Spa will take place at Spa-Francorchamps, Belgium between 27th-30th July 2017.