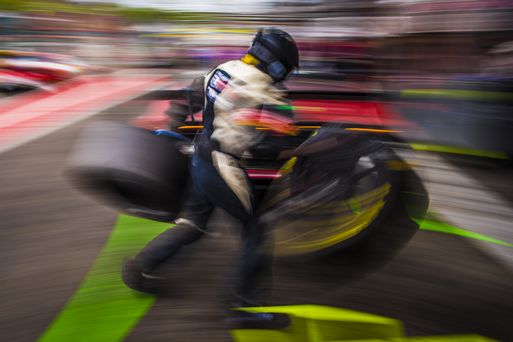 
Barwell Motorsport’s run of three consecutive podium finishes in the Spa 24 Hours sadly came to an end last weekend, with both of our Lamborghini Huracan GT3s retiring from the race. The #77 car of Adrian Amstutz/Martin Kodric/Patrick Kujala/Oliver Gavin managed to score some points at the 12-Hour mark, which has kept us in 2nd position in the Blancpain Endurance Pro-Am Championship. However this car, with Adrian at the wheel, was then involved in a heavy collision with a Kessel Ferrari in the early hours of Sunday morning which put it out of the race. The #78 Huracan of Leo Machitski/Miguel Ramos/Richard Abra/Phil Keen, which had been running strongly during the early stages of the race, got tangled up twice with a Herberth Racing Porsche, and the resulting damage and time lost for repairs unfortunately put the car out of contention completely. Hence it was withdrawn from the race shortly before half distance.

This year at Spa lady luck was certainly not on our side, and a bizarre issue which was completely out of our control struck the #77 Amstutz Produkte-backed car on Saturday even before the race had begun. As Oliver Gavin drove down the pit lane to start the formation lap onto the grid, he immediately reported a problem with the transmission. This was a huge shock to the Barwell crew, given that they had installed a freshly factory-rebuilt gearbox at the start of the week, and it had run faultlessly through testing, practice and qualifying. Olly pulled the car over right at the bottom of the Endurance pit lane, and after consultation with the race officials we were allowed to tow it with our quad bike all the way back up the Endurance pit lane and into the F1 pits where our garages were situated half way down. The crew had by this time diagnosed the issue as a previously unheard-of transmission failure, and set about having to replace the left rear hub, driveshaft and gearbox flange. This was done as quickly as humanly possible, but by the time the car rejoined the track it was four laps down on the race leaders.

Despite what was a highly demoralising and frustrating set-back before the race had even got underway, the team and drivers eagerly and professionally set about the task of recovering this considerable time handicap. And in what was a quite incredible effort from drivers and the team all round, the car went from being dead last – 18th in Pro-Am and 64th overall, all the way back up to 8th in class and 30th overall to score championship points at the half way point. Shortly after this it moved up another notch to take 7th in Pro-Am and was gaining on the 6th placed car as Adrian took over from Patrick around the 13-hour mark, to commence his third stint as dawn was breaking. The collision with the Kessel Ferrari came not long into this stint, with the car suffering significant damage and catching fire. Unfortunately, Adrian has suffered some 2nd degree burns to his arm and several broken ribs in this accident, and will be out of the cockpit for the rest of this year as a result.

After some issues in official qualifying, Phil Keen had been unable to repeat the blistering pace he had shown around Spa during both the British GT race event and 24-hour test day earlier in July. This put the #78 car in a lowly and unrepresentative place on the grid, but Phil had the hammer down from the start and was making up large chunks of ground as he surged forward into the top 30 overall and up to ninth in Pro-Am, right on the tail of a group of five cars who were running together in fourth to eighth places in Pro-Am. Keen stayed in the car after the first pit stop, and was then set to carve his way through this gaggle of rivals when he was knocked into a spin by the erratically driven Herberth Porsche. He recovered from this but then four laps into his second stint he encountered this Porsche again and further contact was made which unfortunately resulted in our Lamborghini suffering significant suspension damage.

Phil got the car back to the pits where a broken front wishbone was diagnosed – unfortunately not a quick part to replace. The mechanics effected the repairs as quickly as possible, but over half an hour (13 laps) had been lost, and such is the competitiveness of the Blancpain GT series that for this car to achieve any sort of points finish would then have relied on many of our rivals having even more serious issues. Further issues arose later on which set the car even further back, and the only sensible course of action was to withdraw it from the running.

The accident with the #77 car unfortunately finished off their hopes of challenging for the Pro-Am Endurance Championship title, but due to them winning the previous two rounds at Silverstone and Paul Ricard and the points gained after 12 hours at Spa, we are still in 2nd position in the standings. Showing his amazing grace, team spirit, and strength of character, Adrian Amstutz has asked us to find a suitable Bronze-graded driver to replace him for the final round at Barcelona. This means that his team-mates, Martin Kodric and Patrick Kujala, will have a great chance of securing 2nd in the Drivers points, and also that Barwell will be able to achieve the same in the Teams Championship.