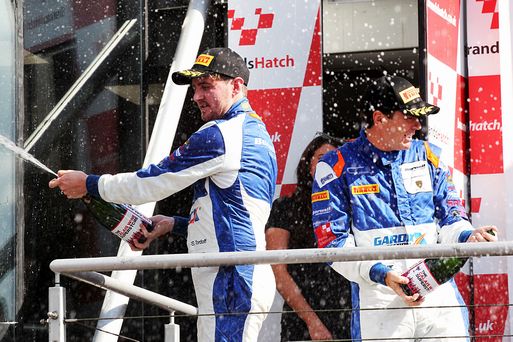 
Barwell Motorsport’s Pro-Am pairing Sam Tordoff and Liam Griffin scored an impressive second place finish at Brands Hatch in last weekend’s British GT 2-Hour encounter. Their fourth podium of the season promotes them to third in this year’s driver standings, behind team-mates Jon Minshaw and Phil Keen, who notched up a fifth place finish at Brands. This result means Jon and Phil will go to Donington’s finale for a ‘winner-takes-all’ Championship title battle against Bentley duo Rick Parfitt and Seb Morris. This double points finish for the two Barwell Motorsport Lamborghini Huracan GT3s means we carry our commanding lead in the Teams Championship standings through to Donington, where we are odds-on to secure the crown.

Having qualified on pole for Round 9 of the 2017 British GT Championship, Minshaw was looking strong in the opening laps, retaining his lead over silver-graded James Littlejohn in the #24 Aston, which lined up next to our Demon Tweeks-backed Lambo. Griffin, who took the wheel of the #6 Gardx-liveried Huracan ran fourth after passing Mark Farmer’s Aston out of Clearways. However the order was to get jumbled up when the GT3 leaders encountered the squabbling masses of GT4 cars, with Jon suffering worst as he was the one who came up behind them first and was then squeezed off the track.

Prior to the Am drivers handing their 5.2litre V10 Huracans over to the Pro counterparts, after an hour of racing, Liam and Jon were holding P3 and P5 respectively. Tordoff emerged second to the #31 Bentley, followed closely by Aston duo Jon Barnes and Jonny Adam, whilst erstwhile championship leader Keen joined fifth post-pit stop. After some wheel to wheel action between Tordoff and Barnes, Tordoff maintained a consistent advantage of over one second, driving superbly under immense pressure before taking the chequered flag. Meanwhile, Phil found himself in pursuit the second Aston, ensuring Jonny Adam never left his sight over the remaining 56 minutes.