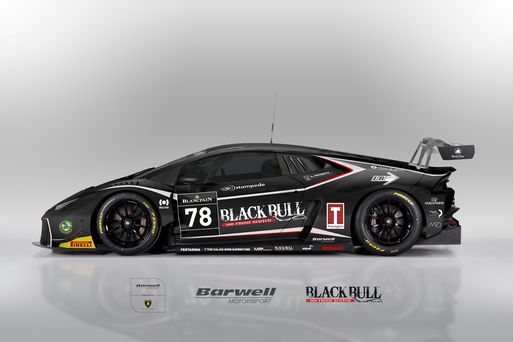 Barwell Motorsport is delighted to announce that it will be entering a Lamborghini Huracan GT3 in the new Silver Cup ‘junior pro’ class of the Blancpain GT Series Endurance Cup in 2018. After many years of success in the Pro-Am class, this will be the first time that Barwell has fielded a Silver Cup car. We are also very excited to be reigniting our association with the Black Bull Scotch whisky brand, with our Blancpain Lamborghini sporting a very striking new black and white livery. Black Bull were previously involved with the team when we ran the highly successful Ecurie Ecosse BMW Z4 GT3 programmes in 2014-15, and will also be involved with Barwell’s British GT squad again this season.

Piloting the Huracan in the five round Endurance Cup, which includes the ‘blue riband’ Spa 24 Hours event, will be a very exciting trio of young GT drivers. One of which, Martin Kodric (20), is already very well know to us as he was part of our successful 2017 Blancpain Pro-Am team, and claimed three victories with us last season. The extremely rapid Croatian also established himself as one of the best ‘overtakers’ in Blancpain last year, coming out on top of many a heated battle for Pro-Am honours.

Joining his fellow official Lamborghini Squadra Corse Junior Driver will be Italian Michele Beretta, who knows both the Huracan GT3 and the Blancpain series very well. Michele (23) brings with him a championship-winning pedigree from the last two seasons, having won the Blancpain Sprint Silver Cup title in 2016 and then the Italian GT Championship crown last year.

Finishing off our line-up is one of the most exciting ‘home grown’ talents moving up from the GT4 ranks in British GT, BRDC Rising Star - Sandy Mitchell. The Scot is still currently only 17 years old as he prepares to make his international GT3 debut, but he has already shown race-winning form in the highly competitive MSA Formula Championship (against the likes of McLaren F1 protégé, Lando Norris) and also in British GT aboard a GT4 McLaren.

The Black Bull-backed Lamborghini will start its testing programme in Portimao, Portugal in February, before moving on to the official Blancpain pre-season test at Paul Ricard on March 13-14, and then to both Monza and Silverstone prior to the first race of the Endurance Cup at Monza on April 22nd.

Mark Lemmer, Barwell Motorsport Team Principal: “I’m not only really excited about entering the new Blancpain Endurance Silver Cup class, but also about the fantastic and talented young driver line-up that we have managed to assemble in our Huracan GT3. We are of course also thrilled to welcome back Black Bull as our overall team partner for 2018.”

Euan Shand, Chairman, Duncan Taylor Scotch Whisky and Black Bull: "We're delighted to be working with Barwell Motorsport again.  As our company sells whisky in 50+ countries, we're looking forward to enhancing our global brand awareness that racing in the Blancpain GT Series will bring.  We have been big supporters of GT racing for several years now and have sponsored teams with Sandy Mitchell at the wheel since he was 15.  He is a hugely talented young driver and we’re delighted he is making his debut in GT3 along with the more experienced Michele Beretta and Martin Kodric.  We wish the team great success and look forward to the season ahead.”

Martin Kodric: “It was a great honour to be part of Barwell Motorsport in 2017, and it’s an even greater one to continue to be part of the team again for the coming season. I’m really looking forward to the year ahead and I think we can convert it into another successful season full of great achievements.”

Michele Beretta: “I am really happy to take part in the Blancpain Endurance Cup with Barwell. At the end of last year I had the opportunity to test with the team, and I have been impressed by the attention to details and professionalism they put in place. I think we have a strong line up to fight for the Silver Cup and I am looking forward to start with the programme next month.”

Sandy Mitchell: “I am extremely excited to make the step up to the Blancpain GT Series Endurance Cup in the ‘Black Bull’ Huracan GT3. It will be a very competitive championship and I am looking forward to the challenge. I am new to the Lamborghini but with the experience of Barwell Motorsport and my team mates, Martin and Michele, I will learn quickly. This is a fantastic opportunity and I’d like to thank Black Bull and all my sponsors for their continued support.”