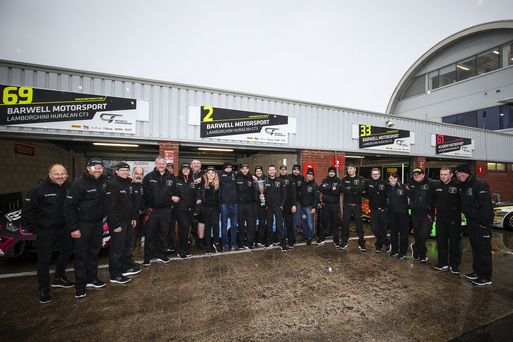 
Now in their sixth year as a dominant Pro-Am driver pairing, Barwell Motorsport’s Jon Minshaw and Phil Keen returned to Cheshire’s Oulton Park for the opening round of the 2018 British GT championship hoping to repeat last year’s double victory. The wet track conditions for Race 1 provided Minshaw with a typically outstanding start to the duo’s championship assault, however, wheel damage sustained to the #33 Huracan with co-driver Phil Keen behind the wheel, in pursuit of race leader Jonny Adam, meant their Lamborghini Huracan GT3 took the chequered flag 4th, followed by Barwell team-mates Leo Machitski/Patrick Kujala in the #2 Huracan and Sam De Haan/Jonny Cocker’s #69 Lamborghini – who finished the 60-minute race P5 and P6 respectively. This marked a mightily impressive British GT debut for Sam, who was also competing in his first ever international level race meeting.

Despite missing out on a podium, Keen’s epic performance in Race 1 was rewarded in the form of Sunoco’s Fastest Lap award. The team remained optimistic of a victory in the weekend’s second race after Phil Keen secured pole position as a result of his record qualifying lap two days previous. Unfortunately, very heavy rain meant Race 2 had to be stopped after just four laps under the safety car, and the terrible conditions meant that it was not possible to restart it. Due to these complicated circumstances, the decision as to whether to award championship points for this race was referred to the British GT Championship Stewards. The Stewards then subsequently ruled that full championship points should be awarded, therefore Phil Keen and Jon Minshaw now lead the 2018 Drivers’ Championship with a total of 37 points, whilst Barwell Motorsport head to Round 3 at Rockingham later this month with a 15-point advantage in the Teams’ Championship. Additionally, the team was presented with the PMW Expo Team of the Weekend Award after our hard working crews successfully repaired damage sustained to all three Lamborghinis on Saturday, getting the trio back on track for qualifying.

Having qualified 7th for the first of Easter Monday’s two 1-hour races, Jon Minshaw made obvious his intention to get an early lead in this year’s championship by storming through the GT3 field at the earliest opportunity, after being held behind the safety car during the opening three laps. Notorious for his outstanding performance in the wet, Minshaw successfully negotiated the Demon Tweeks-backed Lamborghini up to P2 behind Flick Haigh’s Optimum Aston over the following three laps, which begun with a daring move up the inside of the #11 Aston at Old Hall.

Teammate Sam de Haan aboard the #69 Huracan made his GT racing debut at Oulton Park, lining up next to Minshaw P8 and spent most of his first ever stint in British GT chasing down and trying to pass Barwell’s third entry – former British GT3 champion Leo Machitski, who had successfully propelled the #2 Lambo up four places to 7th on Lap 5. Having qualified 11th in the #2 Vimetco Extrusion-backed Huracan, Machitski leapfrogged both the #24 Nissan GT-R and teammate Sam de Haan in the #69 Lambo on the exit of Hislop’s, leaving him battling for position with Lee Mowle in the #116 Mercedes post-safety car. Newbie Sam de Haan proved one to watch, matching Machitski’s pace over the following eight laps, and belying his lack of experience at this level. Meanwhile, up front, Minshaw continued his charge for victory as the track began to dry, closing Haigh’s lead down from more than eight seconds to under three before the Aston pitted for Pro Jonny Adam to take over.

The #33 Huracan pitted on the following lap, along with Machitski aboard #2, leaving Phil Keen – still holding P2, to pursue the #75 Aston. With 17 laps complete, Keen now bumper to bumper with Adam after repeatedly lapping faster the 2.69-mile circuit, it seemed like a tussle for the race lead between the #75 Optimum Aston and the #33 Barwell Lambo was imminent. However, whilst negotiating the GT4 field in pursuit of Adam, Keen made contact with a Ginetta back-marker forcing him to make an unscheduled pit stop with wheel damage and a puncture, rejoining in fourth. He was followed over the finish line by teammates Patrick Kujala in the #2 Lambo, and Jonny Cocker aboard the #69 Huracan, who had successfully leapfrogged the two Bentleys and then pulled away from the rest of the pack to post two very useful points-scoring finishes.