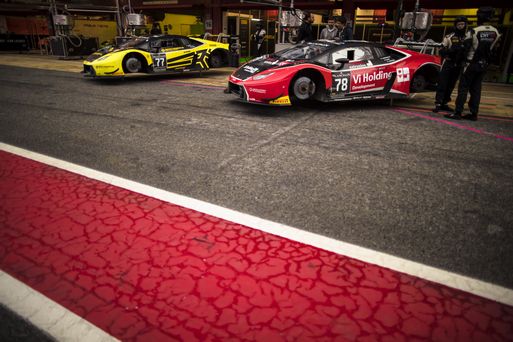 
We are delighted to announce that we will again be running a second Lamborghini Huracan GT3 in a full Blancpain GT Series Endurance Cup campaign, which will make an attack on the Am Cup class – the first time Barwell has pursued a title in this division. Two of our 2017 Blancpain drivers, Adrian Amstutz and Leo Machitski, will team up in this car to contest the full season having raced against each other in their respective Pro-Am entries last season.

Another of Barwell’s long-standing drivers, Jon Minshaw, will join them for the Silverstone and Spa 24 Hour events, with Portuguese driver Francisco Guedes completing the line up at Monza, Paul Ricard and Barcelona. Guedes has mainly been associated with racing Ferraris in Blancpain series, but he also made a one-off appearance in a Barwell Lamborghini Huracan in the 2016 Gulf 12 Hours at Yas Marina.

All four drivers have notched up podium finishes in the Blancpain Endurance series during recent years, and the two line-up combinations should be a threat for Am class honours at each round. Rounding off what will be a formidable entry for the Spa 24 Hours is young Finnish star, Patrick Kujala, who won three races in Blancpain Pro-Am with us last year.

Machitski’s return to the Blancpain GT Series means that he will no longer continue his campaign in the British GT Championship, after he and Kujala claimed a fifth place finish together in race one at Oulton Park on Easter Monday. Barwell will still run a third car in the British GT two-hour race at Spa, however, where Amstutz and Kujala will team up for another one-off foray into our domestic series.