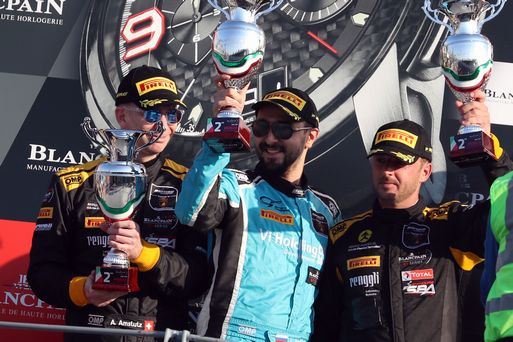 
Following extremely successful pre-season testing, Surrey’s Barwell Motorsport once again headed for Autodromo Nazionale Monza last weekend, bringing with them two of the fifty-four cars entered for the prestigious Blancpain GT Series 2018 Endurance season opener. The #78 Silver Cup Black Bull Scotch Whisky Huracan, driven by Michelle Beretta/Sandy Mitchell/Martin Kodric, was forced to retire after just 10 laps of the iconic Italian Grand Prix circuit with an unfortunate electrical issue. However the weekend ended in elation for Barwell and the #77 Am Cup crew, with Francisco Guedes taking the chequered flag P2 after a hard fought battle from all three Bronze-grade drivers (including Adrian Amstutz and Leo Machitski) over the 3-Hour encounter. The podium finish at Monza was not only Barwell’s first ever podium at the circuit, but it also marked a successful return to Barwell Motorsport for Adrian after his accident at the 24 Hours of Spa 2017.

The Lamborghini Squadra Corse-supported team began the weekend on a high, triumphing in the weekend’s earlier sessions, which included Sandy lapping fastest overall in Friday’s test and Leo leading the all-Bronze Am Cup class in both testing and pre-qualifying in Monza.  Sunday morning’s Qualifying put the #78 Black Bull Scotch Whisky Lambo fifth in the highly competitive Silver Cup class, whilst the #77 Am Cup Huracan GT3 qualified 2nd in class.

The 54-strong field enjoyed a mostly clean start to the three-hour epic, including both Michele Beretta and Adrian Amstutz aboard #78 and #77 respectively, with both showing strong pace from lights out. By the end of the opening lap, Amstutz had climbed up to P36 and was leading the Am Cup class, having passed several of the Pro and Silver Cup cars. Meanwhile, Beretta was running fifth in class and on a charge but was tapped into a lurid slide by the attacking #55 Audi early in his stint at the first chicane, therefore losing out to the Pro #911 Porsche, plus two fellow Silver Cup contenders, including #55.

Unfortunately on Lap 10, Beretta reported a power loss issue with his Lamborghini Huracan and returned to the pits. Despite the best efforts of the team, an in-depth investigation found an electric gremlin within the engine wiring loom, ultimately resulting in the #78 entry’s retirement. This failure is not something that has been seen before by Lamborghini’s GT3 engineers, and was extremely surprising given that the wiring loom was only a quarter of the way through its mileage life span.

One hour into the race, Amstutz pitted 2nd in class having successfully defended against increasing pressure from the #26 Pro-Am Audi. With a considerable buffer of four Pro-Am cars between himself and third in class, Adrian handed the #77 Lambo over to team-mate Machitski, who then rejoined P2 in the Am class. Leo then demonstrated himself to be one of the field’s most competitive Bronze drivers, passing the #89 Am-Cup Mercedes rival at Lesmo 1 to take the class lead within his first few laps. However, the lead was cruelly snatched from Machitski just a few laps later as the #88 Pro AKKA Mercedes nudged the Huracan into a 180-degree spin towards oncoming traffic at the first chicane, which frustratingly resulted in the loss of two Am Cup places.

As the action entered the third and final hour, it was the turn of Francisco, who was persistently fast throughout his stint, just as his two co-drivers had been in the preceding two hours, after emerging from pit lane third in class and 44 seconds behind the class leading #89 Mercedes.

First Guedes needed to close the 8.5 second gap to Rory Penttinen in the #488 Rinaldi Ferrari, occupying the Portuguese racer for his first 13 laps. Lapping consistently quicker, Guedes trumped his Rinaldi class rival with a brave manoeuvre around the outside of the approach into the second chicane to safely pass the Ferrari into the corner - therefore promoting #77 to second in class once more. With just under 40 minutes left on the clock, Guedes charged after the #89 Mercedes Am-Cup leader. Unfortunately running out of time, and having used up his tyres to pursue the Ferrari, he was unable to create an opportunity to pass.