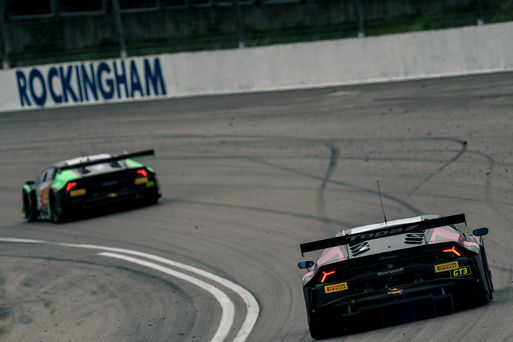 
Having qualified on pole for the third instalment of the 2018 British GT season with co-driver Phil Keen, Barwell’s Jon Minshaw led the race after a nail-biting opening hour stint, despite an untimely appearance from the Safety Car which wiped out the 10 second lead he had built up. However after serving two penalties: one 20 second success penalty, followed by a 10 second stop-go, the #33 Demon Tweeks-backed Lamborghini Huracan GT3 was pushed back to sixth position by the end of the 2-hour race. Meanwhile team-mate Sam De Haan made an absolutely epic Rockingham debut in the Zenith Vehicle Management-supported Huracan, rocketing up from fourth on the grid to second place after a great start and a bold move to pass Oulton race-winner Flick Haigh’s Aston. Sam then threatened to put a pass on Jon for the lead for a few laps, in a stunning drive which belied the fact that this was only his second ever British GT race.

Sadly this performance was not rewarded with the potential victory or podium finish that it deserved, after a freak ECU issue prevented co-driver Jonny Cocker from restarting the car after the pit stop. Despite missing out on silverware this weekend, Barwell Motorsport continues to lead the 2018 British GT Teams’ championship, whilst Jon and Phil are second in the Drivers’ standings.

After Minshaw’s great drive in the first hour, Keen took over the reins and emerged P2 from the pits after serving the 20-second penalty for winning last time out, and was determined to close the 15-second lead of the #47 Aston now driven by Maxime Martin. With Phil lapping consistently quicker than Martin, his charge was aided by two further safety car sessions which brought the gap between the two leaders down to under a second - but split by the lapped #11 Aston of Nicki Thiim.

Unfortunately, any chance of Keen and Minshaw taking their second victory of the season was put paid to after the #33 was issued with a 10-second stop-go penalty by Race Control late in the race, for a rules infringement after Jon unexpectedly removed his crash helmet during the pit-stop prior to strapping Phil in the car. This dropped the Barwell Lamborghini well down the order, with Keen then recovering to take sixth in the final results in the limited time left available.