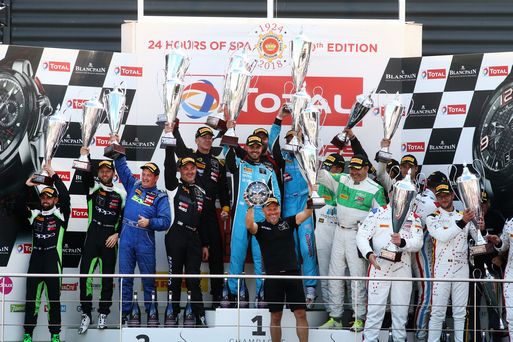 
Barwell Motorsport enjoyed a sensational 70th Edition of the Spa 24 Hours, claiming an Am Cup victory and runner-up in the Silver Cup (just 2 seconds shy of the winner) in the Blancpain GT Series’ blue riband event. These results put us into a strong lead in both the Am Cup Drivers’ Championship (with Adrian Amstutz and Leo Machitski) and Am Cup Teams’ Championship, as well as moving Michele Beretta, Martin Kodric and Sandy Mitchell up into second place in the Endurance Series Silver Cup drivers’ standings.

The #77 Am Cup Lamborghini Huracan GT3 of Adrian, Leo, Richard Abra and Patrick Kujala was involved in an early race class battle with its season-long rivals the Garage 59 McLaren and AKKA Mercedes, but it hit the front during the third hour and then increasingly stamped its authority over the rest of the pack during the remainder of the race. All of the drivers put in fast and consistent stints throughout, and most importantly stayed out of trouble. Together with some excellent strategy calls, the combination proved unstoppable and this car collected maximum points from the race having led at both the six and 12-hour marks. After a near-faultless performance over 24 Hours, it crossed the finish line no less than five laps clear of the class runner-up.

Meanwhile in the Silver Cup, the first six hours featured five cars all running in strong contention for the class honours, including our Black Bull Scotch Whisky-backed Lamborghini (which included Dutch rising star Rik Breukers joining the regular driving squad). The Emil Frey Jaguar initially held sway at the front, but at one-quarter distance it had slipped behind both the leading Ombra Huracan GT3 and our #78 car which had moved up into second spot. As the challenges from early pace-setters the Jaguar and the Aust Audi gradually faded away, the remaining 18 hours of the race became an intense and extremely hard-fought duel between the Barwell and Ombra Huracans. The lead yo-yo’d back and forth constantly, with us coming out on top and claiming leading points after 12 hours, but neither car ever held a lead of more than about 30 seconds during the night.  At three-quarter distance the battle still raged, and we were ahead at this stage by the slender advantage of 16 seconds. However during the final six hours we suffered some cruel luck during a few caution periods, where the Safety Car split us up and allowed the Ombra car to escape and gain another minute on us. This happened twice, and with four hours to go we were the best part of two minutes behind.

But we then staged an incredible fight back as we gained significant time back both on the track and in the pits. As Martin blasted out of the pits for the final hour he was just six seconds behind, and it took him only 20 minutes to catch right up onto the tail of the Ombra car. We then endured an immensely nerve-wracking run to the end as the Croatian youngster tried everything he knew to find a way past. Twice he pulled alongside and banged wheels with the rival Lamborghini but somehow our nemesis just managed to squeeze back ahead. Unfortunately a Pro Class Mercedes then took advantage of Martin being held up and got between the two Silver Cup Huracans with three laps remaining, and this effectively ruined our chances of a last gasp attempt at victory.

The team returns to British GT action again this weekend, where our overall championship leaders, Jon Minshaw and Phil Keen, will attempt to reinforce their title aspirations at Brands Hatch. Team-mates Sam De Haan and Jonny Cocker will also again be in the hunt for a podium finish.