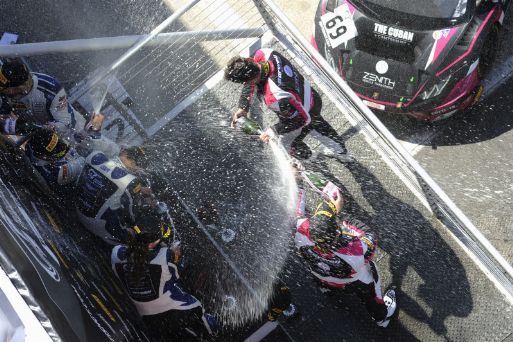 
Barwell’s Sam De Haan and Jonny Cocker put in a storming performance to claim their first British GT podium together, and De Haan’s first ever international-level race podium, at Brands Hatch on August 5th. Their Zenith Vehicle Management-backed Lamborghini Huracan GT3 came within just five minutes of winning the two-hour encounter around the Brands GP track, after Cocker had led the race since the half-way pit stops. However due to rear end damage sustained when Sam had been hit by another car earlier on, the Huracan was suffering from a very badly worn left rear tyre and was becoming increasingly hard to control. With only three laps remaining Jonny suffered a big slide exiting the fast Westfield right-hander, which allowed the Aston Martin of Jonny Adam to slip past him as they blasted up the hill to Dingle Dell and demote the Lamborghini to second spot. However this was a great result for relative racing novice De Haan, and a welcome return to the podium for former British GT Champion Cocker.

Barwell Motorsport team-mates and erstwhile championship leaders, Jon Minshaw and Phil Keen, had also been in strong contention for a podium finish until fate dealt them a cruel blow. With just over 20 minutes to go, the Demon Tweeks-backed Barwell Lamborghini was running fourth and Keen was right in the wheel tracks of Darren Turner’s Aston. With the Aston struggling for pace it seemed only a matter of time before Phil found a way past, but our Lambo then scooped up a big piece of debris from another car which firmly lodged itself in the water radiator housing of the Huracan and blocked the airflow. Sadly this very quickly overheated the engine and we had no choice but to bring the car back into the pits. With a high attrition rate in the race overall, Jon and Phil still managed to get classified as being eighth in GT3 and thus only slipped to second in the championship points. With just the season finale at Donington in September now left they still have a chance of claiming the Drivers title.