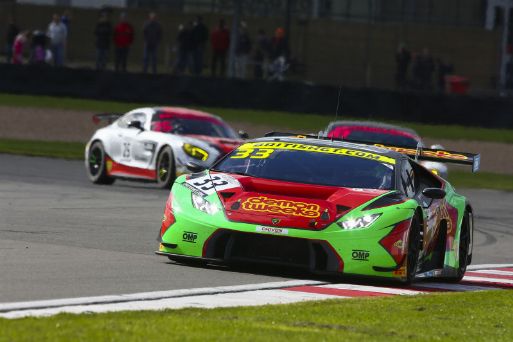 
Barwell Motorsport’s championship contenders Phil Keen and Jon Minshaw brought their 2018 season to a conclusion with yet another race victory at Donington Park, aboard their Demon Tweeks-backed Lamborghini Huracan GT3. The pair, who started the Donington Decider from pole, ended the season as runners-up in the Drivers standings, just 8 points behind Jonny Adam and Flick Haigh, having claimed two race wins this season. The sister Zenith Vehicle Management-backed car of Sam De Haan and Jonny Cocker, which qualified second to give Barwell a front row lockout, finished P6 after both drivers demonstrated a combination of excellent pace and tactful defending throughout Sunday’s two-hour season finale.

After his blinding effort in Saturday’s qualifying which earned him and co-driver Phil Keen pole, AM racer Jon Minshaw started the two-hour race and promptly built up a respectable 15.3-second lead before the Safety Car was deployed due to an oil spill at Redgate Corner. British GT newcomer De Haan, who shares the #69 Lamborghini Huracan with pro driver Jonny Cocker, qualified on the outside of the front row. Sam spent his 64-minute stint trying to pull away from and also tactfully defending from the gang of four Aston Martins behind, including Minshaw’s championship rivals Haigh and Farmer. Graham Davidson aboard the #47 Jetstream Aston briefly demoted De Haan to P3 going through the Melbourne hairpin just moments before the Safety Car was deployed, however Davidson fell victim to the dropped oil, meaning Sam was once again in the best position to try and chase down Minshaw at the restart.

De Haan thus resumed his battle against the Astons, which included a close call at the Melbourne hairpin involving the #11. Farmer momentarily claimed 2nd place before outbraking himself on the exit to the hairpin giving Sam the advantage up the inside of the blue Aston and into Goddards.  Eventually getting the better of the Barwell Lambo going into Redgate, the #11 Aston now separated the two Barwell Lamborghinis, but despite Farmer’s best effort to catch Minshaw, Jon pitted after one hour from P1 with a respectable 7 second advantage over 2nd place - a gap that would later prove integral for Minshaw and Keen’s eventual race victory.

De Haan headed for the pits having completed 38 laps of Donington’s 2.5mile GP track to hand the #69 GT3 Huracan over to co-driver Jonny Cocker, with Cocker required to remain stationary for an additional 15seconds before joining the race as a ‘success’ penalty for the pair’s P2 result last time out at Brands Hatch. The #69 Zenith Vehicle Management-backed Lambo rejoined P6 once the field had ironed out post-pit stops. Despite losing out to the #116 Mercedes of Yelmer Buurman and #24 Nissan of Struan Moore early on, Cocker successfully held off #47 Aston of Maxime Martin whilst a penalty for Beechdean’s Darren Turner promoted the #69 Lambo back up to P7 with just over 30 minutes remaining.

Phil Keen set about preserving Minshaw’s lead, fully aware the Demon Tweeks-liveried Huracan had to take victory in order to keep the pair’s championship hopes alive. However, Nicki Thiim’s Aston Martin was also on the attack and needing the same result to give him and Mark Farmer a shot at the title. Keen managed to fend off several attacks from Thiim but was forced to relinquish his lead going into the Craner Curves.

With Keen left to chase title rival Thiim, the sister Barwell Huracan’s pace was matching that of the #24 Nissan – Cocker staying within half a second to enable him and Moore to swap position several times. Once safely past Moore, Cocker along with Turner had caught up with the #1 Bentley with less than 4 minutes to the flag. Cocker tried to take the inside line into Goddard’s to get past Ratcliffe but pushed the Bentley wide on the exit resulting in contact for the pair where Turner’s #99 Aston was able to join the pair as they charged three-wide up the start-finish-straight. Turner’s Aston got away, with Cocker once again pushed back to P7, allowing Moore to join the Bentley and the Lambo in the fight for 6th. However as a puncture for the #1 Bentley meant Ratcliffe had to slow, allowing Cocker to move past him on the exit of Redgate and going on to complete his fastest lap of the race (1:30.067) before taking the flag 6th.

Keen shadowed Thiim for many laps, and was shaping up to re-pass his rival, when it was confirmed by Race Control that the Aston had been given a 30-second time penalty for consistent excessive track limits abuse. This meant all Phil had to do was sit behind his rival, not take any risks and claim the race win at the finish.

Jon and Phil thus took their 13th British GT win together. Their post-Donington points total of 159.5 each gives the duo the honour of 2018 British GT Driver’s Championship runners-up. Jonny Cocker and Sam de Haan finished a well-deserved 8th in the standings for their first year together in British GT. The combination of points put Barwell Motorsport second in the 2018 Team’s championship – missing out on this year’s title by just 8.5 points.