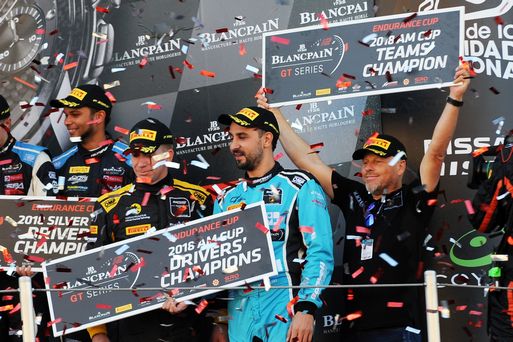 
In the Blancpain GT Series season-closing finale at Barcelona, we claimed a remarkable fourth and fifth international-level GT3 championship titles out of the last five years. Leo Machitski, Adrian Amstutz and Richard Abra crossed the finish line in Spain to take their second Am Cup victory of the season aboard Barwell’s Lamborghini Huracan GT3, and in doing so claimed both the Drivers’ championship crown for Leo and Adrian, and the Teams’ title for Barwell Motorsport. This marked the first Blancpain title victories for us, having finished as runners-up in Pro-Am in both 2014 and 2017.

We also came oh-so-close to clinching the Silver Cup championship as well, with drivers Sandy Mitchell, Martin Kodric and Michele Beretta working their way into a title-winning position during the first half of the race. Unfortunately a rude nerf from a Mercedes then damaged the rear wing of their Black Bull Whisky-supported Huracan and spoiled our day, but they still managed to finish third in the Silver Cup Endurance standings in the end. This meant that we scored a Top-3 result in all three of the Championships we contested this year – 1st in Blancpain Am; 2nd in British GT Overall; 3rd in Blancpain Endurance Silver Cup ! Plus along the way we claimed a total of five race victories and six second places.