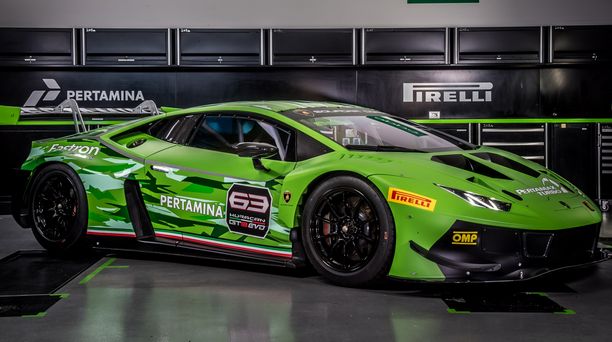 
Top UK-based GT team, Barwell Motorsport, is delighted to confirm that it will be continuing its successful partnership with Lamborghini Squadra Corse for its GT3 programmes over the next three years. The 2018 Blancpain GT Series Am Cup Championship-winning outfit will thus be running a squad of new Huracan GT3 Evos in its campaigns in both the Blancpain GT Series Endurance Cup and British GT Championship, where it competes as an official factory-supported team.

Barwell, who won a total of three races in Blancpain and two in British GT last season, will again be fielding two cars in each championship. Having claimed no less than 10 outright British GT Championship race wins with Lamborghini over the past three seasons, the Surrey-based outfit will have two entries capable of taking overall honours in 2019. Sam De Haan and Jonny Cocker will be set to continue their very strong end of 2018 form into the new season, when Sam is now sure to benefit from already having his first season of international-level racing under his belt.

Long-time Barwell driver and multiple BGT race-winner, Jon Minshaw, will be stepping away from British GT for 2019, as he seeks fresh challenges in the international GT3 arena. Hence, we have agreed a deal with an exciting new driver to be the new incumbent in Barwell’s other Lamborghini in British GT next season, whose identity will be revealed in a separate forthcoming release. This new Am will be paired with an official Lamborghini Squadra Corse factory Pro driver….

The team will be defending its Blancpain Am Cup title with one car, and also continuing in the highly-competitive Silver Cup ‘Junior Pro’ class where this year we were in contention for the crown right up until the final moments of the season and eventually claimed third spot. Am Cup Drivers Champions, Adrian Amstutz and Leo Machitski, will return to the fold for a crack at a second title in a row, alongside a third driver still to be confirmed. Meanwhile the Black Bull Whisky-supported Silver Cup Huracan will again feature 18-year-old up-and-coming Scottish superstar, Sandy Mitchell, and Barwell is evaluating and looking for other young hotshoes for the other two seats in that car.

Giorgio Sanna, head of Lamborghini Squadra Corse:  "We are very glad to continue our successful partnership with Barwell Motorsport, we have achieved many important results together in the last 3 years, now we look forward to face new challenges with the fantastic new Huracan GT3 Evo."


Mark Lemmer, MD Barwell Motorsport: “We are thrilled to announce the continuation of our highly successful partnership with Lamborghini with the new Huracan GT3 Evo. The Evo is exactly that, a natural evolution of what has already proved to be a fantastic car. We are also privileged to welcome back Leo, Adrian, Sam, Jonny & Sandy, as well as our main team partner, Black Bull Scotch Whisky. Also we can’t wait to reveal an exciting driver pairing for BGT in the coming weeks. We have already achieved championship success with Lamborghini, but we are keen to add more race victories & titles in our quest for further success in both the UK and Europe!”

Euan Shand, Chairman of Black Bull and Duncan Taylor Scotch Whisky: “2018 was a great year for the Barwell team with wins at Paul Ricard and Spa.  We are delighted to confirm our commitment to supporting the team again with our award-winning Black Bull whisky brand.  We look forward to the season ahead and the global brand awareness that comes with the Blancpain GT Series.”

Sam De Haan: “I was a complete racing novice just over a year ago, so it’s been a whirlwind last 12 months to go from that to be an overall British GT podium finisher in my first ever full season of racing! I have had great guidance from Jonny and the guys at Barwell, and they give me an environment where I can learn and keep improving, as well as really enjoy my racing. And next season I’m going to be gunning for race wins and hopefully a crack at the title!”

Jonny Cocker: “I’m absolutely delighted to be continuing our British GT campaign together with Sam and Barwell Motorsport in the new Huracan GT3 Evo. It’s plain to see the development that Sam made during 2018, taking a podium at Brands Hatch being the highlight of our season. We knew that year one would be a learning year and year two we would be aiming for the title, and that’s exactly the mindset that we’re carrying into 2019. I can’t wait to get started!”

Adrian Amstutz: “2018 was a great year, and switching to the Am Cup from Pro-Am was a very good move for Leo and I. It’s still very competitive, and as an Am driver your performance counts a lot more towards the overall result. So now Leo and I have another year ahead of trying to prove that we are faster than each other! Also great to be back with Barwell and Lamborghini for a third season in GT3, they are my racing family!”

Leo Machitski: “The dream team is back to defend our titles! I loved racing in the Am Cup this year, Adrian and I had great fun and both drove well, and to win at Spa 24H and clinch the championship was incredible. I’ve lost count of how many years I’ve been with Barwell now, but Mark and the guys have proven time and time again that they are a team capable of winning races and championships at the very highest levels in GT racing. I can’t wait to get started again with the new Evo Huracan, which is awesome to drive!”

Sandy Mitchell: “I am really looking forward to racing with Barwell Motorsport in the new Lamborghini Huracan GT3 Evo, and it is fantastic to have the support of Black Bull Whisky to which I am extremely thankful. I am very proud to be a BRDC Rising Star and Lamborghini Squadra Corse Junior GT3 driver, 2019 is certainly shaping up to be a very exciting season! The Blancpain GT Endurance Series is a great championship and I can’t wait for it to start.”