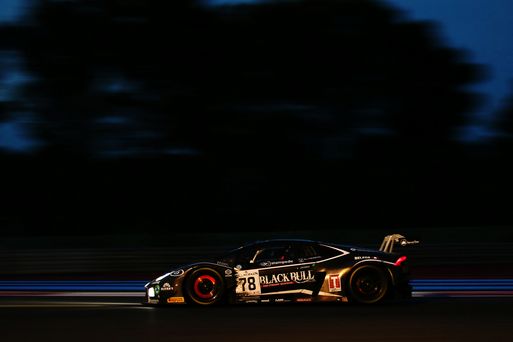 
Barwell Motorsport is delighted to announce that it will again be competing in the Silver Cup class of the Blancpain GT Series Endurance Cup, after claiming victory at the Paul Ricard 1000Kms and third in the championship last year. In 2019 the British team will be campaigning a brand new Lamborghini Huracan GT3 Evo, with continued backing from our team sponsor, Black Bull Whisky. The Silver Cup car will be run alongside the sister Huracan GT3 Evo of reigning Blancpain Am Cup Champions, Leo Machitski and Adrian Amstutz.

The driver line-up for this season features one old and two new-to-Barwell faces, with rapid Scottish teenager Sandy Mitchell staying in the car for a second season and being joined by Lamborghini Super Trofeo star, James Pull, and former UK GT Cup Champion, Jordan Witt.

Mitchell graduated to GT3 with Barwell for the 2018 Blancpain season, and immediately showed that he is a star in the making with some highly impressive performances in both qualifying and the races. He hit the winners circle in round three at Paul Ricard and then claimed the runner-up spot in his first ever Spa 24 Hours. British-Malaysian driver Pull (19) made the switch to GT cars last year after finishing runner-up in the 2017 BRDC British F3 Championship, was a front-runner in both the Asian and European Super Trofeo championships and claimed a history victory (the first in the series for a British driver) at Spa-Francorchamps. Witt meanwhile has been racing at GT3 level for four years, claiming the UK GT Cup title in 2016, and then racing on the international stage in GT Open and Blancpain Endurance during the past two seasons. After previously campaigning a mixture of Chevron, Bentley, Mercedes and Nissan GT3 machinery, this will be his first season racing a Lamborghini.

The Black Bull-backed Lamborghini Huracan GT3 Evo will start its testing programme in Portimao, Portugal in February, before moving on to the official Blancpain pre-season test at Paul Ricard on March 13-14, and then to Silverstone prior to the first race of the Endurance Cup at Monza on April 14th.

Mark Lemmer, Barwell Motorsport Team Principal: “Firstly I’d like to say a big thank to Black Bull Scotch Whisky, as it’s their continuous support of our Silver Cup young driver programme that allows us to be able to put together such an exciting driver line up. We are very happy to welcome rising stars James Pull and Jordan Witt on board, and with them joining Sandy we will once again have a crew capable of challenging for race victories and the Silver Cup title.”

Euan Shand, Chairman, Duncan Taylor Scotch Whisky and Black Bull: “Following the success of the team last year, we are excited to be sponsoring the Barwell team for a second season in a row.  Blancpain gives us an elevated profile to our global whisky brand Black Bull, in an exciting arena and we know the team are hungry for success.  We’d like to wish them all the best for 2019.”

Sandy Mitchell: “I thoroughly enjoyed my first season of GT3 racing last year and I am extremely excited to be back racing in the Blancpain GT Series Endurance Cup. It is fantastic to be returning with Barwell Motorsport and Black Bull Scotch Whisky and I’m very much looking forward to driving the Lamborghini Huracan GT3 Evo with Jordan and James for the season. We have a fantastic package and I am confident we can challenge for the Silver Cup title in 2019.”

James Pull: “I’m excited to be driving in GT3 this year, especially competing in Blancpain. I’m delighted to join Barwell Motorsport, they’re a really strong team and have enjoyed great success over the past few years. My team-mates are talented guys and together I think we have a really good shot at the Silver Cup Championship this year. I’m looking forward to learning as much as I can within the GT3 paddock and having the opportunity to show what I can do. Of course, I’m really excited to get the chance to compete in longer races like the 24 hours of Spa, it’ll be my first 24 hour experience and I can’t wait to get out there.”

Jordan Witt: ““I can’t wait to get to work in the new Lamborghini Huracan GT3 Evo. I’ve seen Barwell as a team achieve some fantastic success over the years and I’m hoping with my team-mates this year we can add to that.”