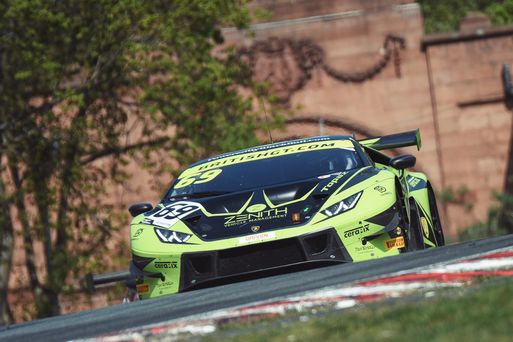 
Barwell Motorsport’s 2019 British GT campaign got off to a flying start over the Easter Weekend at Cheshire’s Oulton Park. Race one of two saw Adam Balon and Phil Keen bring their Techtrak-backed Lamborghini Huracan GT3 Evo home in 2nd with Sam De Haan and Jonny Cocker just missing out on a podium in 4th. An action-packed race two resulted in De Haan and Cocker claiming a hard-fought victory with Balon and Keen following suit in claiming 4th. Only one year on since his GT3 Debut, Sam De Haan and Jonny Cocker come away from the event leading the British GT Drivers’ Championship in their Zenith Vehicle Management-backed Lamborghini Huracan GT3 Evo. Adam Balon, whom has only just stepped up to GT3, partnered with Lamborghini Factory Driver Phil Keen, sit second in the points table thus leaving Barwell Motorsport top of the Teams’ Championship standings with a healthy lead. De Haan’s performance over both races resulted in him being awarded the Blancpain Driver of the Weekend, however in order to not to be outdone, Keen also won Sunoco’s Fastest Lap Trophy.

The unexpected sunshine and high temperatures graced us on Monday’s race day with Sam starting P3 and Adam P6 after suffering with traffic on his hot lap in qualifying on Saturday. The charge to the first corner resulted in both De Haan and Balon losing a place each however both avoided the carnage between RAM’s Mercedes and Team Parker’s Bentley on lap two, resulting in De Haan claiming P2 with Century Motorsport’s two BMWs close behind and seeking a way past. On the final corner immediately prior to the driver change pit stop, De Haan suffered a hit on the rear from Willmott’s BMW which pushed him off the track and cost him two places. Meanwhile, Balon continued to hold his own and maintained a consistent track position against experienced rivals before handing over to Keen. With Adam pitting a lap later and having a clearer pit lane, this allowed Phil to rejoin seven seconds behind race leader Morris in the JRM Bentley. With Sam being held up by the wayward Century BMW duo,  Jonny emerged behind these two and also behind Optimum’s Aston Martin in P4. Cocker was unable to find a way past on Oulton Park’s narrow and twisty circuit, despite hounding the Aston and finished in P4, whilst Keen had to settle with second after a big charge had brought him close to the lead Bentley only to be scuppered by GT4 traffic; eventually finishing only three seconds behind Morris.

After a fantastic flying lap on Saturday’s qualy session, Keen started race two from pole position with Cocker starting only two rows behind in P5.  Lights out and Phil was converting pole into a comfortable lead whilst Cocker brilliantly saved a near race-ending slide triggered by Thiim’s TF Sport Aston Martin. Phil’s lead was soon sadly destroyed by a safety car period due to having to recover Fox Motorsport’s GT4 Mercedes AMG from the gravel. Once restarted, Keen unleashed the Techtrak backed Lamborghini again, but was unable to achieve the seven second lead that was required in order to counteract the success penalty from race one. A pit stop that seemed to drag on for car #72 due to the success penalty was duly completed and Balon left the box in P4, joining a gaggle of cars hotly contesting third place. Adam held his own well in this enthralling battle, and ever so briefly snatched 3rd position at the chicance, before being pushed wide and losing the place to Howard’s Aston Martin. Balon thus only just losing out on his fight for a double podium for the weekend crossing the line in 4th.

After another stint trying to find a way past an Aston Martin, Cocker brought the car in for the driver change in P6, and a perfectly timed pitstop from the team resulted in De Haan jumping up to P3. He was immediately on the attack against Farmer’s Aston, and claimed second spot in a bold move down the inside into the ultra-fast Island Bend. Sam then had the opportunity to close in on race leader Neary in the Team ABBA Mercedes AMG. Eventually Sam’s constant pressure forced Neary into a mistake at the Chicance and De Haan surged past around the outside in another cracking manoeuvre, to take the race lead. He then pulled out a gap and brought the car home in 1st place, claiming his maiden British GT Victory.