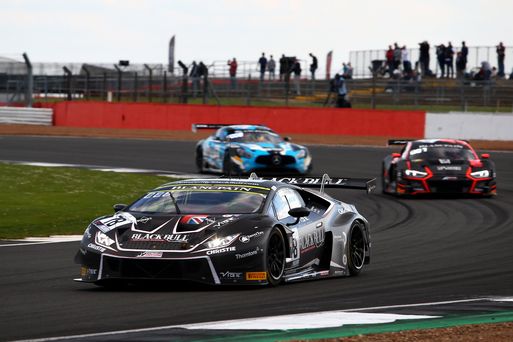 
Both of our Blancpain GT Series Lamborghini Huracan Evos featured in the hunt for honours at last weekend’s round 2 of the Endurance Cup at Silverstone. Once again the Barwell cars were extremely strong on our ‘home’ track, and qualified superbly with the BlackBull Silver Cup crew of James Pull, Jordan Witt and Sandy Mitchell claiming an impressive 7th overall and 2nd in class on the grid, which was backed up by the Vimetco Extrusion/Amstutz Produkte/Vodafone-backed Lambo taking Am Cup pole position in the hands of Adrian Amstutz, Leo Machitski and Miguel Ramos. Having been running 6th overall and 2nd in class during the opening stint, the Silver Cup car looked set to challenge for victory but an unfortunately timed Full Course Yellow (FCY) period after their first pit stop meant they slipped down the order, before fighting back up to 5th in class. The Am car was also set back by the first FCY period, but during a dramatic second half of the race it made an amazing comeback to claim two out of two wins this season, and a fourth consecutive Am Cup victory following on from 2018. This result means that Amstutz/Machitski/Ramos lead both the Overall Blancpain GT Series Am standings and the Endurance Cup points, with Barwell also topping both tables in the Teams Championships.

James Pull made a good start in the BlackBull Lamborghini to slot in behind the factory Bentley and the leading Silver Cup Attempto Audi  in 6th overall. It soon because clear that Audi was holding the Bentley and our Huracan up, and after the British machine found a way past James also went on the attack. He got a great run going through Becketts and was poised to draft past down the Hangar Straight, but as he closed up onto the rear bumper of the Audi he lost front downforce and was forced to run wide on the exit. This allowed two cars past but James kept on their tails for the remainder of his stint. We then brought him in slightly earlier than originally planned in order to get Jordan out on fresh Pirellis and try and get the undercut to jump back ahead of the three cars in front and claim the class lead. This would have worked – and put us in a potential Silver Cup winning position – had the FCY not occurred two laps later, which allowed all of our main rivals to do their pit stops whilst we were forced to crawl round the track at just 80kmh.

This dropped us to 9th in Class and out of the top 20 overall, such was the disadvantage we had to endure through no fault of our own. Jordan then put in a good middle stint but was hampered in his efforts to climb back up the order by another lengthy FCY and Safety Car period. We employed the same strategy to get him into the pits before our rivals, which this time worked perfectly as Sandy came out in sixth place in Silver class. He then moved up to fourth spot before being badly held up by a Pro-Am Bentley which was a lap down, which allowed the Rinaldi Ferrari to sneak past and peg us back to fifth spot and 15th overall at the flag. Still a good result, but there was no doubt that we were robbed of a much better finish, as the Silver Cup-winning Grasser Lamborghini had been a few places behind Pull for all of his opening stint.

In the Am car Adrian was given the tough task of having to start in amongst all the Pro drivers from both Pro cars and Pro-am cars that hadn’t done a good job in qualifying. He kept the Barwell Huracan out of trouble however and maintained the Am class lead for the majority of his stint. This car then pitted just before the first FCY period, which hurt their track position badly and meant that Leo had to begin a fight back from sixth in class. The Russian relished the challenge however and blasted back up to second spot in Am behind the Raton Lamborghini by the end of his stint. Miguel then jumped aboard and within a handful of laps he had passed our rival Lambo to take the Am Cup lead back. The race wasn’t over by any means, however, as Fabien Barthez was on a charge in his Lexus GT3 and closed to within three seconds of Ramos. Miguel responded strongly to the threat,  and then pulled out a bigger gap before the Lexus was forced to make a pit stop with 15 minutes to go due to a going off and sustaining some damage and a puncture. We still weren’t in the clear however, as the car telemetry was showing that we had a slow puncture on the left front tyre and pressure was very gradually bleeding out of it! However, at this stage the Raton car had also hit problems, and we had over 50 seconds lead over the Lexus and so were able to make a comfortable precautionary pit stop to fit a replacement front tyre and still maintain our winning position.

The next round of the Blancpain GT Series Endurance Cup is at Paul Ricard in France on June 1st, for the spectacular 6-hour ‘ into-the-night’ 1,000Kms race.