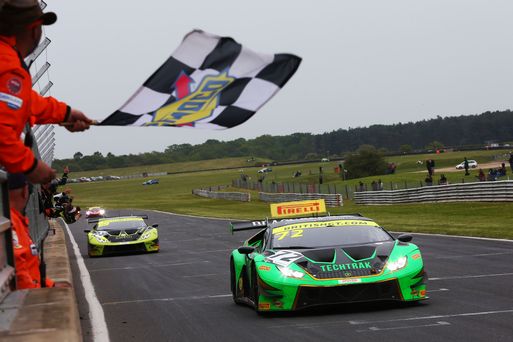 
Barwell’s British GT squad enjoyed a highly successful weekend at Snetterton, claiming victory in both of the one-hour encounters and a 1-2 finish in race two was the icing on the cake! Adam Balon took his debut British GT overall win in race one and then he and team-mate Phil Keen repeated the feat in the second round of the day, this making Phil the winningest driver of the British GT3 era. In the sister Zenith Vehicle Management-backed Lamborghini Huracan GT3 Evo, Sam De Haan and Jonny Cocker claimed fourth spot in race one and then finished just half a second behind the Balon/Keen car second time around to give us another historical one-two result. This significant points haul has pulled both of our crews clear in the Drivers’ Championship, with Techtrak-supported Adam and Phil now slipping ahead of erstwhile leaders Sam and Jonny. It has also given Barwell a dominant lead of almost 100 points in the Teams Championship standings, with us having claimed three wins out of the four races held this season to date.

In the first race at Snetterton, the Silver-Silver driver crewed cars surged to the front ahead of the Ams, with the Parker Bentley, Century BMW and Optimum Aston leading the way ahead of Sam De Haan and the other Ams during the early stages. Sam then got rudely punted off the track and down the order by the sister Century BMW which received a stop-go penalty for its sins. This elevated Adam into fourth spot, and he kept in touch with the Aston in front for the remainder of his stint. When Phil emerged after the pit stop, he made short work of passing the Vantage and then third became second after the previously first-placed Bentley suffered a delay during its pit stop and slipped back. Keeny then hunted down the now leading Century BeeEm and was absolutely hounding the German machine at every corner but couldn’t find a way past as the M6 stretched its turbo-powered legs down each straight. Then the Century car suddenly slowed exiting the first corner and Phil strode past to take the lead and surge ahead to an unchallenged victory thereafter. Having served their extra 10-seconds in the pits after winning last time out at Oulton, the De Haan/Cocker Lambo emerged from its pit stop with Jonny down in 9th place. Cocker put on a charge however, and was up to fifth with 10 laps to go. He then relentlessly closed the gap to the three cars squabbling over second place and joined in the fun as a fourth combatant in the closing stages. Then an eventful final lap saw the JRM Bentley hit a GT4 car and lose time, moving Cocker up to fourth which almost became third as the Bentley’s issues had slowed the TF Sport Aston and Jonny came to within less than a 10th of a second of sneaking past it at the finish line!

For the second one-hour encounter it was the Pros who were in for the first stints, and Phil slotted into second behind the pole-sitting Aston of Nicki Thiim, as Jonny shadowed him in third spot. The front two remained glued together for most of the first half of the race, with Keen on occasion getting very close to his rival when they were lapping the GT4 traffic. Cocker meanwhile remained in touch from a few seconds back, but towards the end of his stint he suffered badly with the GT4 cars and the gap grew out by four seconds. After the pit stops to switch to the Am drivers, the TF Aston (now with Mark Farmer at the wheel) had a clear lead, after the Keen to Balon switch had to endure the extra 10-second success penalty due to its race one victory. Adam just emerged from the pits with an extremely slender margin over Sam, but the two Barwell Lamborghinis sensibly focused on catching the leader rather than squabbling amongst themselves over second place. With a light drizzle now falling down on the slick dry tyre-shod cars, conditions were getting quite slippery and tricky on track but both Balon and De Haan revelled in the confident handling of their Huracan GT3 Evos and reeled in the leader with 10 laps to go. Adam then soon caught Farmer napping at Coram as he squeezed down the inside through the fast right-hander to take the lead. The Aston driver was more robust in his defence of second from Sam, but it took the Barwell man only one further lap to demote him and complete the 1-2 team finish.