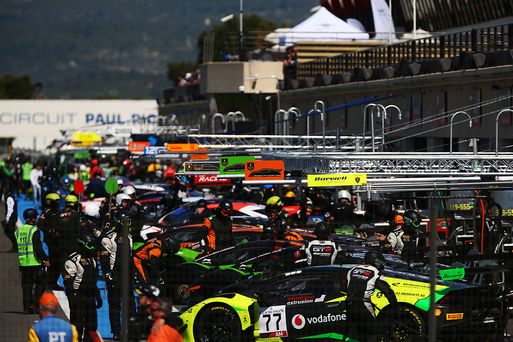 
Our Blancpain Endurance Am Cup crew achieved their sixth consecutive podium finish last weekend, with a second place for Adrian Amstutz, Leo Machitski and Miguel Ramos in the Paul Ricard 6-Hours aboard their Lamborghini Huracan GT3 Evo. This continued this car’s impressive run of champagne-spraying results for its drivers in the Blancpain GT Series, which stretches back to the 2018 French encounter where it also finished second before notching up an incredible run of four victories across the end of ’18 and start of this season. This also just happened to include winning the Am Cup in the ‘blue riband’ 24 hours of Spa too! The Amstutz Produkte/Vimetco Extrusion/Renaissance Construction/Vodafone-backed squad currently still leads both the Overall Blancpain GT Series Am Cup championship, and the Endurance Cup points standings as well.

The phrase ‘if they didn’t have bad luck they’d have none at all’ could certainly be applied to our Silver Cup squad, however, who this time were taken out of the race during the first hour after two cars collided behind them and one then spun out of control and crashed into our BlackBull-supported Lamborghini. Having qualified extremely strongly again after great laps from James Pull, Jordan Witt and Sandy Mitchell, they started from 3rd in class and 16th overall with an average lap time less than half a second slower than the overall pole-sitting factory Pro Bentley. James then made a stonking start and moved up to 12th overall and 2nd in class during the course of the opening lap. After the Safety Car period that followed James then very nearly got past the #63 Grasser Lamborghini Pro car on the first racing lap, but then as he exited the final corner, he became the innocent victim of the collision behind him.