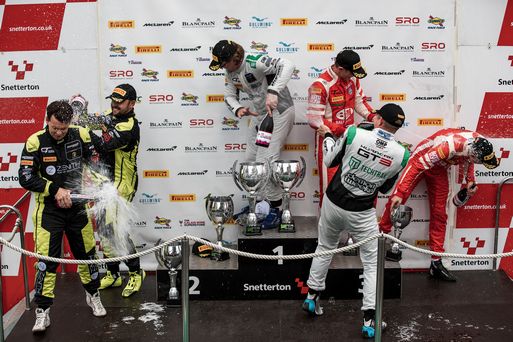 26 June 2019 Barwell leading 6 Championships at half-way stage of the season!


It’s been a pretty successful first half to the season for Barwell Motorsport! Across the Blancpain GT Series, British GT Championship and a one-off Creventic 24H Series outing, we have scooped up a total of no less than five victories and five other podium finishes so far with our fleet of stunning Lamborghini Huracan GT3 Evos. Out of the eight race events contested, we have been spraying champagne on the podium on seven occasions!

This impressive strike rate means that we are currently leading both the Blancpain GT Series Am Cup and British GT Championship points, in both the Drivers and Teams standings. In Blancpain we are actually in front in four championships, as we lead both the Overall Blancpain GT Series and Endurance Cup Am points, with Adrian Amstutz, Leo Machitski and Miguel Ramos heading up the Drivers’ standings. Although our Black Bull Whisky-backed Silver Cup crew of Jordan Witt, Sandy Mitchell and James Pull haven’t been able to add to our podium tally just yet, they have run in top three positions at each Blancpain Endurance event so far and it has only been bad luck that has kept them from securing the podium results they have deserved.

To underline our success to date, in British GT our two driver pairings are first and second in the Drivers’ Championship respectively, with Adam Balon/Phil Keen leading (2 wins) and Sam De Haan/Jonny Cocker (1 win) currently occupying second place but only 8.5 points behind their Barwell team-mates. And due to their combined success, we are also enjoying a healthy advantage at the front of the Teams Championship at this stage of the game.

Next stop for both series is a double attack in Belgium at the glorious Spa-Francorchamps Grand Prix Circuit. First up is round seven of the British GT Championship, a 2-hour encounter on July 21st, which is then followed by Blancpain’s blue-riband race, the Spa 24 Hours on July 27-28.