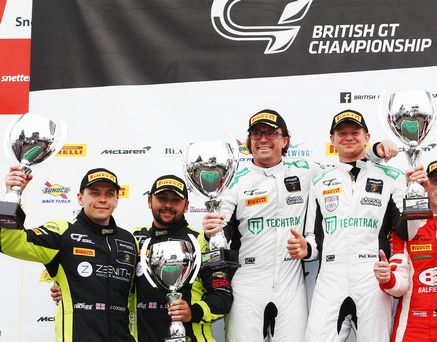 
2019 British GT Teams and GT3 Pro-Am Drivers Champion, Barwell Motorsport, is delighted to confirm that double race-winner Adam Balon will be continuing in one of its Lamborghini Huracan GT3 Evos for the 2020 season. This year Adam and Pro driver Phil Keen claimed victory in both races at Snetterton, and led the overall drivers championship for much of the season, in GT4 graduate Balon’s first season in GT3. After what was originally planned as a learning year in 2019, Adam is set to challenge once again for the title in 2020, with Phil alongside him for their second season together.

Adam’s team-mate from 2019, Sam De Haan, had a very successful second year with Barwell as, together with Jonny Cocker, the 22-year-old claimed his first international level race victory at Oulton Park and went on to win the Pro-Am Drivers Championship title. However due to Sam’s Silver FIA driver grading, and rapid development over the last two seasons, as he enters his third season of GT3 he is no longer permitted to partner with a factory Pro-level driver and it has been difficult for us to find a suitably graded and qualified Pro driver to continue with Sam in BGT as a Pro-Am pairing. Hence unfortunately Sam won’t be with us again for the 2020 season in British GT, however we are very proud of what he has achieved with us since being a race rookie only three years ago, and we wish him all the best for the future.

Barwell is currently carrying out a series of test days over the next month, as it evaluates possible serious replacements for Sam in its British GT line-up. All interested parties are welcome to contact the team for further information.