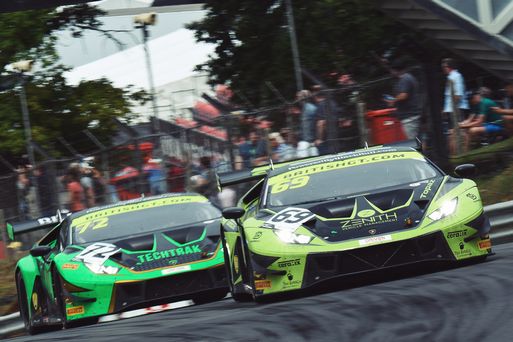 
As has been common in recent years, the British GT Championship finale at Donington Park provided plenty of action and high drama, with the outcome of the various championship titles to-ing and fro-ing throughout the two-hour encounter. In the end Barwell’s Lamborghini Huracan GT3 Evos and our drivers came away with three titles, with us claiming the Teams Championship for a fourth time; Sam De Haan and Jonny Cocker winning the GT3 Pro-Am standings and Sam also scooping up the Blancpain Trophy as the best Am driver. The only title we missed out on was the overall Drivers crown, with De Haan and Cocker finishing as the runners-up by just 2.5 points! In fact, immediately after the race had finished they were in an Overall Drivers title-winning position too, but a post-race time penalty given to another car allowed our main championship rivals to move up the order and just pip us to the crown! Meanwhile the sister Barwell Lambo of Adam Balon/Phil Keen suffered extremely cruel luck, having come into the finale as points leaders and been in a strong overall championship-winning position early on. Adam got hit by a GT4 car as he was lapping it, which bent the rear suspension and this subsequently broke just after Phil had taken over and they were poised to bring home the title.


In the early stages of the race, Balon was in a very strong position, running comfortably in fourth place and ahead of his two main championship rivals – these being the Aston of Graham Davidson/Jonny Adam and his Barwell team-mates De Haan/Cocker. But then 20 minutes into the race he came upon a GT4 KTM on the approach to McLeans corner and got badly baulked, allowing both the Aston and the following BMW to get past. However, the BMW was alongside just as Adam moved to go around the GT4 car, which meant there was little room to play with and the KTM hit the rear corner of the Techtrak-supported Barwell Lamborghini. The resulting damage left Balon struggling with a wounded and evil handling car, and inevitably he slipped back down the order, but hung on gamely to stay in with a good chance of still taking the title. When Phil took over after the pit stops, he was only needing to overtake one car to bring the #72 Huracan back into a championship-winning spot, but soon after this the suspension broke and forced him into the pits. The crew replaced the broken part, but six laps were lost and sadly their title challenge was over.

Barwell still had another player in the overall title game, though, as De Haan had driven a strong stint to keep his Zenith Vehicle Management-backed Lambo in contention. When Cocker took over this car after the pit stops, he came out right behind the Aston of Jonny Adam, which he needed to pass to stand a chance of taking the crown. Soon Cocker was joined by the WPi Motorsport Huracan of Dennis Lind, and the two Lamborghinis took it in turns to try and usurp their Aston rival. For Cocker and De Haan to win the overall title they had to finish two cars ahead of the Aston, and with only four laps to go time was running out. Then on the next lap the Aston was slowed by a GT4 car entering the Old Hairpin and Lind inadvertently touched its rear bumper, resulting in a slow exit for both cars. Cocker took full advantage of this and outgunned both of them up the hill towards McLeans to move into fourth place. Shortly after this Lind also found a way past the Aston which put our #69 Lambo in a championship-winning position by half a point! We knew that the contact between the WPi car and the Aston could result in a time penalty for Lind, however, and so Jonny pressed on and caught Jack Mitchell’s BMW, only just failing to pass it before the finish when he was held up by a backmarker. If he had found a way past the BeeEm this would have secured the title, but when Lind was put back behind the Aston post-race, it elevated the Davidson/Adam Aston in the results and points, and meant that Jonny and Sam were pushed back into the runner-up spot in the championship.