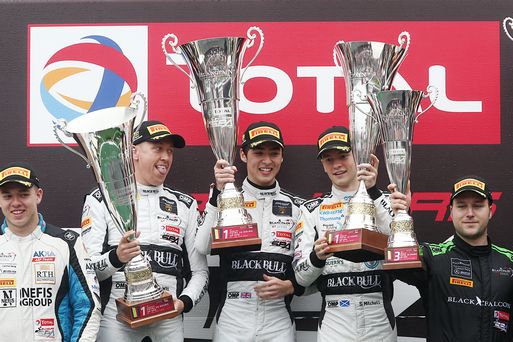 
The last weekend of July means it’s Spa 24-hour time, the biggest and most high-profile stand-alone GT race event in the world – and this year’s was bigger than ever with no less than 72 GT3 cars taking the start. And one which we have usually excelled at in the past, especially last year when we claimed Am Cup victory and runner-up in the Silver Cup in the Blancpain Endurance series’ ‘Blue Riband’ event . And 2019 has proven to be our most successful to date, as we reversed last year’s results to claim the Silver Cup win with the BlackBull Lamborghini Huracan GT3 Evo of Sandy Mitchell/James Pull/Jordan Witt, and finished 2nd in the Am Cup with Adrian Amstutz/Leo Machitski/Richard Abra/Patrick Kujala. With the Am car also leading the way at both the six and 12 hour marks, this meant that Leo and Adrian have already amassed enough points to take the Blancpain Am Cup title (with one round still to go) and thus hold onto the Championship Crown that they won last season! Meanwhile the Silver Cup boys have now moved up to fourth in the points standings, and thus join a close three-way battle for the runner-up spot in the Championship, which will be decided at Barcelona’s season-closer in September.

This year’s race featured extraordinary weather conditions, with the rainstorm becoming so bad that the Race Director wisely stopped the race just before dawn, and so awful were the track and visibility conditions that it wasn’t restarted until 11.30 on Sunday morning. Even when the rain stopped the track was still treacherous as the kerbs and run off areas were like ice, and unfortunately some very big accidents occurred throughout the race, with the final one coming in the last half an hour. All of our drivers, engineers, and crew thus did an incredible job to not only survive this test, but also come through with flying colours.

The Silver Cup car was in contention for top class honours and a top 20 overall position from the early stages, claiming third place after six hours and then also the points for second at half distance. The second half of the race then developed into a dogfight between our BlackBull Lambo and the Silver Cup championship-leading AKKA Mercedes, with it being in front of us by a good margin, but owing us its mandatory 5-minute brake change ‘intervention pit stop’. The Merc took this shortly after racing recommenced on Sunday morning, and dropped back behind us by around 20 seconds. Despite this pressure, we managed to not only keep their attack at bay but also extend the lead to over a minute before the final hour. With the late race accidents causing two Safety Car periods in the closing 30 minutes, we had a very nail biting and tense end to the race, but held on to take a fantastic Silver Cup victory. With the race featuring no less than 35 factory Pro cars, it was also a highly impressive achievement for this car to come home 15th overall, and first non-factory finisher, as well as being the second highest Lamborghini in the final results.

The Amstutz Produkte/Vimetco Extrusion/Renaissance Construction-backed Am Cup Huracan spent most of the first 12 hours embroiled in a battle for top three honours with our Championship arch-rivals in the Garage 59 Aston Martin, and the Rinaldi Racing Ferrari. Crucially we arranged our driver running strategy around maximising the points on offer at the six and 12 hour marks, and this gave Adrian and Leo a very healthy title push as we led at both these stages. Their Championship-winning odds were further enhanced when the Garage 59 car suffered an accident after 10 hours, and plummeted down the order. We still held the class lead with two hours to go, but the Rinaldi Ferrari now had their very fast Pro driver at the wheel and once he had passed us Leo and Adrian thus concentrated on bringing the car home and claiming back-to-back Blancpain Am Cup championship titles.