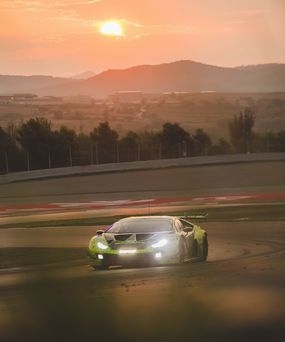 
Barwell Motorsport secured a thrilling outright victory in the Creventic 24H Series Barcelona 24 Hours, which took place at the Spanish GP venue on August 31st-September 1st. After an incredibly hard-fought race-long duel with the rival Pro Class Herberth Porsche, our driver crew of Adrian Amstutz, Leo Machitski, Patrick Kujala and Dennis Lind came home a mere 10 seconds ahead in their Lamborghini Huracan GT3 Evo to secure Barwell’s first ever overall Creventic series victory. This was also a very historic victory; in that it was the first ever outright 24-Hour race win fir a Lamborghini! With the Amstutz Produkte/Vimetco Extrusions/Renaissance Construction-backed Lambo also claiming Pole Position and fastest race lap, this rounded out a very successful event for the team. With Adrian and Patrick having also finished 2nd in the Mugello 12 Hours earlier this year, this meant that they claimed third place in the Creventic European A6 Pro Championship, with Barwell also finishing third in the A6 Pro Teams’ Points standings.

When Patrick Kujala led the field away from pole position at the start, we had no idea of the titanic battle that was set to unfold throughout the entire race. During the first two hours it was very tight at the front, and although we consistently led the way we had a trio of cars snapping at our heels comprising the Herberth Porsche, the Ferrari of series champions Scuderia Praha, and the Spa 24 Hours-winning GPX Racing Porsche. From this point onwards, however, the Barwell Lamborghini and the Herberth Pro class Porsche pulled away from the rest and engaged in a mighty struggle that saw the lead constantly swap to and fro between us, according to pit stop/refuelling strategy and whether each of us had either an Am or Pro driver in their car. The true gap on the road between us was never more than 40 seconds, and for most of the race was much closer than that. At the halfway mark we were ahead by 25 seconds, with a quarter of the race left it was 19 seconds, and so it went on.

As if the intensity of this battle wasn’t enough, behind the scenes in the Barwell camp we had quite a few curved balls being thrown at us. Firstly, after his incredibly rapid opening stints in the searing Spanish heat, Patrick then suffered an attack of heat stroke, and had to be rested out of the car for longer than had been originally planned. On top of this, Dennis was having to endure a bad shoulder pain which also resulted in a migraine, and so was unable to complete the double stints that we had planned. All of this meant that Adrian and Leo both had to drive for longer than anticipated, piling more and more pressure onto the race duel where a single mistake by either a driver or the pit crew could have very well made the difference between winning and losing. The team physio worked hard to get both Patrick and Dennis back fighting fit, however, and they returned to duty and delivered some fantastic stints to see off the challenge from the Pro drivers in the Porsche. All the drivers and team continued to perform faultlessly as the Sunday morning hours ticked by, which meant that the two-horse battle with the Herberth car went into the final hour with Barwell ahead and just eight seconds between us!

The tension was unbelievable for the final hour, and was further intensified by the fact that we were having to stretch out the final stint to previously unchartered lengths on a tank of fuel! The Barwell engineers did a fantastic job of keeping Dennis informed of the situation on the fuel calculations, and he was instructed to fuel save and coast where appropriate. To counter this issue, Herberth had run out of Pro driving time and was forced to put an Am in the car for the final stint. This meant that Lind’s fuel saving pace was a match for the flat-out driving pace of their Am, and we were able to manage the final hour in this way and bring the car home for an incredible victory.