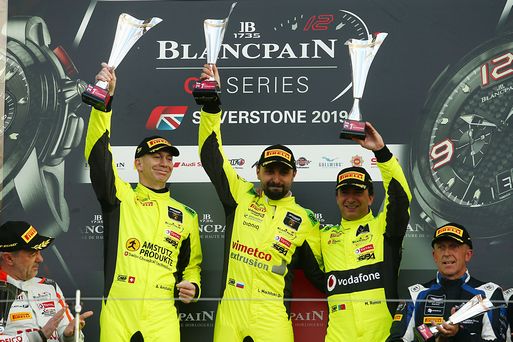 
For the past two seasons, Barwell Motorsport, Leo Machitski and Adrian Amstutz have claimed back-to-back Blancpain GT Series Endurance Am Cup titles with their Lamborghini Huracan GT3. These incredibly successful campaigns have included a win at the Spa 24 Hours and three other race victories during the last two years, and in 2019 they have already wrapped up the Am Cup title with the final round at Barcelona still to go. For 2020 Barwell and Leo will be continuing in the series together, either in Am Cup again or in the Pro-Am class, but Adrian is now stepping down from a full-time Blancpain campaign. Hence Machitski and the team are now seeking a replacement Bronze grade driver, with suitable credentials, to take up the highly coveted Blancpain seat left vacant by Amstutz for the 2020 season. Barwell will also be continuing with its successful Silver Cup car in Blancpain next year, which took victory in the Spa 24 Hours this season.

After claiming the Lamborghini Super Trofeo Pro-Am crown in 2016, Adrian moved up to the Blancpain Endurance series with Barwell the year after and contested the Pro-Am Cup with Martin Kodric and Patrick Kujala. Success came quickly with wins in the Silverstone 3-Hours and the Paul Ricard 1000kms, but then disaster struck at the Spa 24 Hours when he was involved in a serious collision during the night where the car caught fire and Adrian unfortunately suffered some injuries which kept him out of the cockpit for the end of the season. He made an incredible comeback in 2018 when he teamed up with Leo in the Am Cup and laid his Spa demons to rest with a dominant victory in the Spa 24 Hours, before going on to take the title with another win at Barcelona. Following that he made it four wins in a row by claiming the top step of the podium in the first two races of this year, and then a second Championship crown in a row after securing second at Spa (and points for leading at both six and 12 hours).

Having achieved all of his goals in Blancpain, Amstutz is now switching the main focus of his racing activities to the Creventic 24H Series, and other endurance events such as the Gulf 12 Hours, although he hasn’t ruled out potentially making some one-off Blancpain Series returns in the future. During 2019 he has contested the Mugello 12 Hours and the Barcelona 24 Hours in a Barwell Lambo, finishing second in Italy and claiming outright victory in Barcelona. The Swiss driver has now confirmed he will contest this year’s Gulf 12 Hours at Abu Dhabi in December and also the Dubai 24 Hours in January 2020, and is currently evaluating other Creventic events for his next year’s programme with us.

Adrian Amstutz: “I’ve had an incredible journey in the amazing Blancpain Endurance series, which is the absolute pinnacle of GT racing for Am drivers. However I have achieved all my goals, and more, in this arena and the time feels right now to step back from competing at this level full-time, and focus on some different style of events with my favourite team, Barwell Motorsport.”