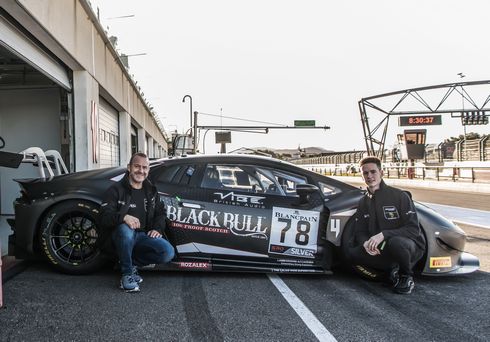 
With the previously announced pairing of Adam Balon and Phil Keen again occupying one of our Lamborghini Huracan GT3 Evos in British GT in 2020, we have now confirmed an exciting new pairing in our second championship-contending car. One of these is a young man very well known to the team in the form of 20-year-old official Lamborghini GT3 Junior Driver, Sandy Mitchell, who will be partnered by a driver not only new to the team but to GT racing as a whole, in BTCC-convert Rob Collard. Sandy and Rob’s Huracan will be sporting the stunning Black Bull Whisky livery that has been featured for the past two years on our Blancpain Endurance Silver Cup entry.

Mitchell is returning to British GT having spent the last two seasons in the European Blancpain endurance series, as part of Barwell’s successful Silver Cup squad. The highlight of these was undoubtedly last year’s incredible victory at the Spa 24 Hours, which has firmly marked the Scot out as one of the rising stars of the international GT racing scene. He previously raced in British GT during the 2016-17 seasons, as part of the McLaren GT4 young driver development programme. Hence 2020 will see his first attack on the overall British GT3 championship title, and in addition to this programme Sandy will be re-joining Barwell’s Black Bull Silver Cup car in the Spa 24 Hours.

Collard (51), meanwhile, is very well known to British racing fans after being one of the stalwarts of the British Touring Car Championship over the last 20 years. During that time Rob has been a multiple race winner and finished in the top five of the championship standings, having been well established as part of the West Surrey Racing BMW squad for much of his time in the tin-top series. The Hampshire-based company owner has now decided to take on a fresh challenge in GT racing, however, starting with British GT this season and with a view to joining the international GT scene going forward.

Sandy Mitchell: “I'm extremely excited to be racing with Barwell and Black Bull Whisky again this year. I feel I've made great progress over the last two years competing in the Silver Cup Class in Europe and I look forward to hopefully challenging for the outright British GT title this year. I know the team well and I'm sure Rob will enjoy racing in GT3 and with Barwell. I'm confident our Black Bull Huracan can be challenging for wins all year.”

Rob Collard: “After 20 years in the BTCC I was looking for a fresh challenge in motorsport.  Watching my sons Ricky and Jordan’s fantastic success over the last few seasons racing in GT3 and GT4 in Europe, I have definitely had my head turned and wanted to try something new. Driving a Lamborghini for such a successful team as Barwell Motorsport will be one of the highlights of my career.  Alongside such a highly rated Lamborghini young driver as my team-mate Sandy Mitchell, I am sure we will be in for a good season.”

Chairman of Scottish sponsors Black Bull Scotch Whisky, Euan Shand: “Our commitment to Barwell Motorsport continues for the 3rd year in a row and increases awareness of Black Bull Scotch Whisky in 2 arenas - British GT Championship and the GT World Challenge Europe Cup.  Using motorsport to promote the visibility of our core brand makes sense as we continue to export our whisky globally.  Whilst we always want to communicate our brand to a new audience, it’s also about supporting Scottish racing drivers like Sandy Mitchell, who we believe has a huge future ahead of him.  We wish the team and the drivers the best of luck for the forthcoming season.”