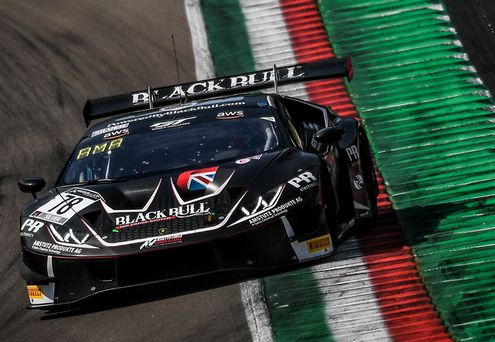 
Barwell Motorsport kicked off the new-look 2020 season in fine style at Imola in Italy last weekend, with a hard-fought victory in the GT World Challenge Europe Silver Cup for our BlackBull Lamborghini Huracan GT3 Evo driven by Frederik Schandorff, Alex MacDowall and Patrick Kujala. In line with other major motorsport events, the race meeting was run behind closed doors and SRO provided an environment for all the teams and drivers to make a safe return to racing. This included strict Covid-19 measures such as controlled social distancing and mandatory wearing of PPE by everyone present at the circuit. The Silver Cup car also claimed a strong 12th overall in the 46-car field which included 22 full Pro class cars, and meanwhile our sister Lambo was also looking good for a podium in the Pro-Am class for much of the race, with Leo Machitski, Rob Collard and Sandy Mitchell on board. However just after Sandy had taken over for the final stint in the Vimetco Extrusion/Asterus-backed Huracan, he was the innocent victim of an incident involving another car which caused a traffic jam on the track and left him nowhere to go but to make contact. The resulting damage forced him into the pits for repairs, and the team did a great job to get the car out again so that it could salvage some points for ninth place.

The Silver Cup crew pulled an amazing victory out of the bag after a topsy-turvy 3-Hour race which saw it down as low as sixth in class at one stage and seemingly out of contention for a win! Frederik made a good start and was running third on the opening lap, before he suffered a high-speed trip through a gravel trap on lap two. He did a great job of keeping the car in one piece however and having dropped to fifth he then pushed on hard to recover back to third by the end of his stint. Unfortunately this hard work was then undone by getting a drive-through penalty for speeding during a Full Course Yellow (FCY) period! Annoyingly we had been suffering some radio interference and just at the crucial moment when his Engineer came on the radio to tell Frederik there was a FCY about to start, the Danish driver was unable to hear him and hence didn’t get on the 80kmh speed limiter in time.

The penalty was actually applied after Alex had taken the wheel for the middle stint and dropped him back down to sixth. The Brit then also put on a charge to move back up to fourth before the final pit stops after two hours. Some highly slick pit work by the Barwell crew and great pace from Patrick meant we had climbed to second with half an hour of racing left, just under 10 seconds behind the leading Garage 59 Aston Martin of Hasse-Clot. With Kujala having a good pace advantage over the Aston driver, there was definitely still time for Patrick to catch and pass our rival for the win. We didn’t get to see such a battle, however, as the Aston got delayed by another car spinning in front of it and Patrick was able to cruise past and secure a well-deserved victory after a tough race.

Former British Touring Car star, Rob Collard, was making his GT racing debut with us at Imola, but seemed completely undaunted by being in the middle of a pack of 46 GT3 cars at a circuit he had never been to before as he took the start for the Pro-Am crew. After an assured first hour behind the wheel he brought the Lamborghini into the pits in second, just a few seconds behind the leading Sky-Tempesta Racing Ferrari. Unfortunately however due to his opening hour stint featuring three FCY/Safety Car periods which bunched the field back up every time, Rob was not able to use his strong pace to pull out a gap over our main Pro-Am rivals behind.  Leo then took over and showed great pace as he kept the car in the hunt for a podium place, although some of the rival teams had elected to put their Pro drivers in for this stint and so he inevitably got shuffled down the order by a few places. However we knew that our Pro, Sandy, was then going in for the final hour and so it would be payback time!

Sandy took over and after another exemplary pit stop he quickly moved up to third place, with the second placed BMW now having an Am driver on board so we were looking good for a second-place finish to give us a double podium. However, unfortunately during Leo’s stint the merciless Imola kerbs had inflicted some damage on the front suspension of the Barwell Huracan, and Sandy radioed in to say that the car was becoming increasingly difficult to drive. There was then a Safety Car period but upon the race being restarted it was clear that the car had a major handling problem and Sandy was a sitting duck for the cars immediately behind him. Shortly after came the incident where the Am-driven BMW had spun and caused chaos behind as the tight pack of cars all had to brake hard to avoid it. This had a concertina effect and Sandy arrived with a completely blocked track and had nowhere to go but into the car in front of him (which unfortunately was the leading Silver Cup Garage 59 Aston – which he inadvertently knocked into a spin). He got the car back to the pits and then the Barwell mechanics set about repairing both the crash damage and the suspension damage. A great job from the boys saw Sandy back out in the race and still able to claim a points scoring ninth position. 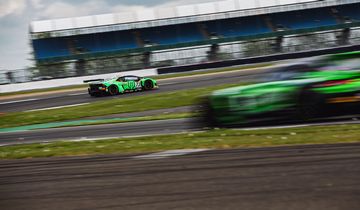