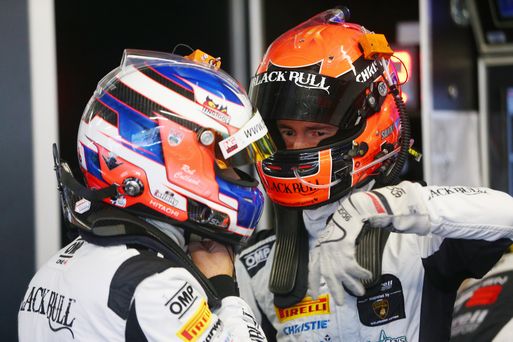 
Rob Collard and Sandy Mitchell took their first outright British GT Championship race victory at Brands Hatch last weekend, after an extremely tense second half of the two-hour encounter around the Brands GP track. The Black Bull Scotch Whisky-backed duo, who also took a podium finish at Oulton Park in their Lamborghini Huracan GT3 Evo, are now at the head of both the Overall Drivers Championship and the Silver Cup class standings. Their Barwell team-mates, and erstwhile championship leaders Adam Balon and Phil Keen, meanwhile had a frustrating weekend which saw an unfortunately timed Safety Car ruin their chances of a points finish. With 5 of the 9 races now completed, Barwell Motorsport also still leads the overall Teams Championship although it’s proving to be a tight battle with the Ram Racing Mercedes squad.

With the combined qualifying times from both drivers providing the formula for the starting grid, Rob and Sandy did a great job to line up in second spot, just missing out on pole position by a 10th of a second across the two best lap times. BTCC veteran Collard used his considerable racecraft at the rolling start to make sure he was able to slot into second behind the leading McLaren of James Baldwin, and not lose out to cars behind from what can be a tricky outside front row starting slot. During the opening laps Baldwin and Collard were then able to pull away slowly from the pursuing pack and establish themselves in first and second places. It was soon apparent that the Baldwin-driven RJN McLaren, despite missing much of Saturday’s free practice sessions, had superior pace to everyone else and pulled out a sizeable lead of nearly 30 seconds over Rob, who was in turn just over 10 seconds ahead of the third placed car after the first hour of racing.

Just on the hour mark and a lap before the pit stop window was due to open, a car that was beached in a gravel trap brought out the Safety Car which had the converse effect of hugely helping Rob and Sandy, but at the same time massively disadvantaging poor Adam and Phil who had their 15-second Donington success penalty to take in the stop and would thus go a lap down on the majority of the field. With Adam running in 11th spot and Phil due to take over and use his superior pace against the Silver drivers, their Techtrak-backed Huracan could have been on course for a potential useful points finish but sadly this opportunity was denied them. The sister car of Collard/Mitchell however was then put right back into contention for victory by the Safety Car, as it wiped out the McLaren’s lead just as all the cars headed into the pits for fuel, new tyres and the driver changes.

We then received a second slice of luck for the Black Bull Scotch Whisky Lamborghini crew, as the leading McLaren was baulked slightly by an Official Course Car as it left its pit stop and this allowed Sandy to just get ahead of it in the line to leave the pit lane and hence re-join the fray with the race lead. He had the RJN McLaren, now with O’Brien on board, snapping at his heels however and the young Scot couldn’t afford to put a wheel wrong throughout the second half of the race. There was absolutely nothing to choose between the top six cars, who were covered by just three seconds and virtually every lap were all setting identical lap times. Sandy soaked up the pressure superbly, and also dealt confidently with a restart after another Safety Car period half way through his stint. The margin back to his pursuers was rarely more than three-quarters of a second but Mitchell reeled off the laps and dealt with the GT4 traffic well to record his and Rob’s maiden overall British GT win.

The Barwell Motorsport team’s win was welcomed by Euan Shand, Chairman of sponsors, Huntly-based Black Bull Scotch Whisky; “That was a truly stunning performance by the team and made all the sweeter by the victory,” Shand said. “Important championship points were gained and so we raised a dram of Black Bull whisky afterward to celebrate their achievement.”