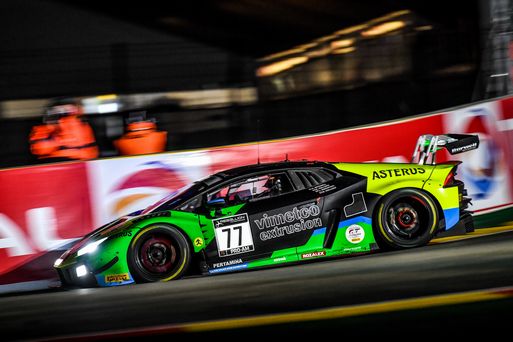 
We made it an incredible three class wins in a row with our Pro-Am Cup victory, after a gruelling race in mixed weather and track conditions, which took place mainly under darkness!  The Vimetco Extrusions-backed Lamborghini Huracan GT3 of Leo Machitski, Rob Collard, Ricky Collard and Sandy Mitchell triumphed in an intense three-way battle for the win, which had raged throughout the race and right up until the chequered flag. With Barwell winning the Am Cup at Spa in 2018 and then the Silver Cup last year, this Pro-Am victory completed the hat-trick and also the set of all three class wins.

This crew also brought home the first Lamborghini of the 56-car strong grid, crossing the line an impressive 15th overall and as the first non-factory supported Pro car finisher (which was our second time in a row achieving this). Not only was it Sandy and Leo’s second win at Spa, having both won with us in previous years, but also the first time there has ever been a father/son victory with Rob and Ricky. Leo Machitski was also the first Russian driver past the finishing line.

The sister Black Bull Scotch Whisky-backed Lamborghini Huracan GT3 Evo, driven by Frederik Schandorff, Alex MacDowall and Patrick Kujala, had been leading the Silver Cup class for the majority of the race, but then became an innocent victim of a multi-car collision at Raidillon with only seven hours remaining. Fortunately, Alex walked away unharmed, but the damage to the car was too severe, ending the Silver Cup leaders’ race. However this car still collected an excellent points haul for the event, having scored points for running first after 6 hours, second at the 12-hour mark and then we had completed enough distance to still be a classified finisher in 8th place at the end.

Heading to the season finale at Paul Ricard, we are now in a very strong lead in both the Silver Cup Endurance Drivers and Team Championships, and a finish in the top four there will ensure our maiden Silver Cup championship titles. Meanwhile thanks to their phenomenal performance at Spa, the Pro-Am crew of Leo, Sandy and Rob sit third in their Championship, a mere seven points behind the joint leaders.