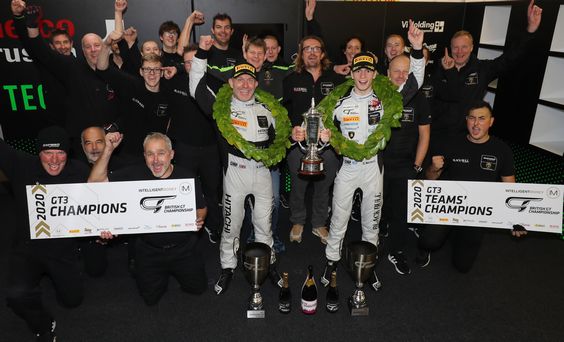 
Barwell’s Rob Collard and Sandy Mitchell scored a resounding victory in British GT’s showcase race, the Silverstone 500, and in doing so secured the overall British GT Drivers Championship crown aboard their Black Bull Scotch Whisky-backed Lamborghini Huracan GT3 Evo. Their second win of the season was an emphatic one after they had led for much of the 3-hour race, and it has also earnt themselves and Barwell Motorsport a place in history by taking Lamborghini’s first ever outright British GT Drivers title. Team-mates Adam Balon and Phil Keen also led the race and put themselves firmly in the fight for the championship early on, but when Adam was punted into a spin by a rival this dashed their hopes and they had to settle for third in the overall points standings, having also taken two victories this season in their Techtrak-backed Huracan. Rob and Sandy’s title is the second overall Drivers crown for the team, after we claimed it for a first time in 2014 when Marco Attard became champion aboard the Barwell-run/Ecurie Ecosse-entered BMW Z4 GT3.

Silverstone’s victory, the fourth of the year for the team out of the nine races, also meant that Barwell Motorsport took the British GT Teams Championship title for a fifth time !  Other 2020 accolades include Collard/Mitchell also taking the Silver Cup title along with their overall championship victory, and Balon/Keen finishing as runner-up in the Pro-Am class standings. We have previously won two British GT Drivers class titles, starting in the first ever year of GT3 back in 2006 (when GT2 was in its last year as the lead overall class) with Leo Machitski and then last year Sam De Haan and Jonny Cocker claimed the Pro-Am Cup crown and overall runner-up spot.