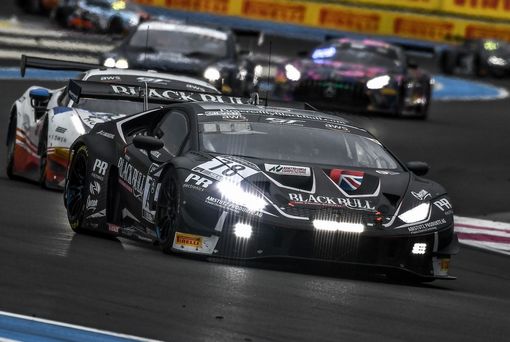 
A comfortable victory in the season finale Paul Ricard 1000kms race has secured the GT World Challenge Europe Endurance (GTWCEE) Silver Cup Drivers and Teams Championship crowns for Frederik Schandorff, Alex MacDowall, Patrick Kujala, and Barwell Motorsport, respectively. The second Silver Cup win of the season for the Black Bull Scotch Whisky-backed Lamborghini Huracan GT3 Evo came after a composed and ultimately dominant win in the classic French race, which further extended their points advantage at the head of the championship standings. This means that Barwell Motorsport has now completed a hat-trick of international GT3 titles in the Blancpain Endurance Cup/GTWCEE, having won the Am Cup crowns in both 2018 and 2019.

The sister Vimetco Extrusion/Asterus-backed Barwell Lamborghini Huracan of Leo Machitski, Rob Collard and Sandy Mitchell was also in strong contention for the Pro-Am Cup title. The trio led the race on many occasions and were in a Championship-winning position with just half an hour to go, but ultimately had to settle for second in the race and third in the Pro-Am points standings. So close to completing the GTWCEE ‘Double’ for Barwell Motorsport, but this crew’s fantastic win at Spa 24 Hours will remain a big highlight of the season.

The Silver Cup crown means that the two Black Bull Scotch Whisky-liveried cars have both won their respective main championship titles this season, with the GTWCEE victory now added to Sandy and Rob’s overall British GT Championship Drivers title. Barwell Motorsport has also cleaned up in the Teams Championship stakes, taking both the British GT (overall) and GTWCEE Silver Cup crowns. We have also claimed a total of seven race victories across all of our entries, with four in British (2 for Collard/Mitchell and 2 for Adam Balon/Phil Keen) and three in GTWCEE (2 for the Silver Cup car plus the Spa 24 Hours win for the Pro-Am crew).

The team’s victory was praised by Chairman of main sponsors, Black Bull Scotch Whisky, Euan Shand; "Wow, what a fantastic end to a brilliant year of racing,  Following last weekend’s success this was an incredible result at Paul Ricard and a fitting end to the season. We’re proud to have supported the Barwell Motorsport team and drivers and shows that their hard work and perseverance has paid off. We raised a very large dram of Black Bull whisky to celebrate.”