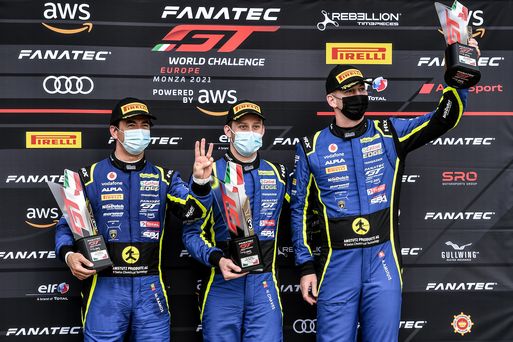 
Having claimed a podium finish at every round of last year’s GT World Challenge Europe (GTWCE), Barwell Motorsport continued the run into the 2021 season with a hard-fought third place in Pro-Am in the 3-Hour Endurance race at Monza. This was a great result for our new Pro-Am line up of Adrian Amstutz, Miguel Ramos and Henrique Chaves, with the latter two set to contest the full GTWCE championship series in both Endurance and Sprint this year in our Lamborghini Huracan GT3 Evo.

After qualifying in 8th place in Pro-Am the drivers were disappointed as they all felt that they hadn’t hooked up their best laps possible, but they were still confident that they had a good car for the race. The 3-Hour encounter at Monza usually produces an entertaining and intense spectacle, and this year was no different as the weather and track conditions continually changed throughout the race. This meant lots of strategy calls on tyres and pit stops, which we excel at making and the changing conditions certainly played into our hands.

After a strong opening stint by Adrian, where he started on slicks but then as the rain hit Monza he was forced to change to wet tyres, Henrique took over in the second hour and moved the car into the top three. Unfortunately, a portion of the Portuguese youngster’s stint was held under Full Course Yellow conditions and so we were not able to fully exploit his strong pace and maximise our strategy during this period of the race.

However we enjoyed a little slice of luck as we were able to complete the final tyre change and refuel pit stop under a Full Course Yellow, and this allowed Miguel to re-join the track in the Pro-am lead. With just under 40 minutes to go the field was bunched up behind the Safety Car and then released back into racing conditions, and we had a sniff at taking the class victory. Ramos had a very tough job on his hand though, as he had to try and fend off factory Pro drivers Jonny Adam and Phil Keen in the Garage 59 Aston Martin and FFF Racing Lamborghini, respectively. As if this wasn’t enough to have on his plate, the damp conditions also made it very hard for him to maintain good tyre temperature in his Pirelli slicks. As expected however these two rivals found a way past our Huracan during the final half hour, but Miguel safely brought the car home for a well-earned third place podium finish and an excellent points haul for the championship.