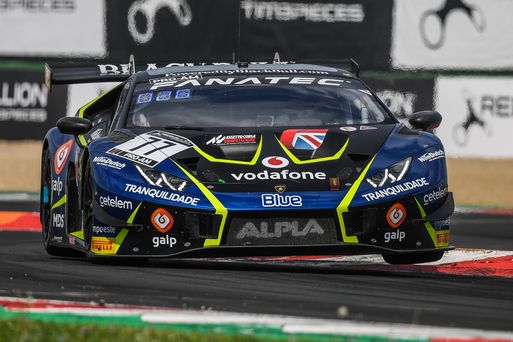 
Portuguese duo Miguel Ramos and Henrique Chaves secured our first GT World Challenge Europe (GTWCE) Sprint Cup Pro-Am victory in race two of the opening event at Magny Cours on May 8/9th. This marked a successful Sprint Cup series debut for the team at the former French GP venue, adding a fourth place in the first one-hour race of the meeting to put Miguel and Henry (as he’s now known!) second in the Pro-Am points standings of both the Sprint Cup and the Overall GTWCE championship.

With neither driver having much experience of the tough and unforgiving Magny Cours circuit and pre-race track time very limited over the weekend, it was a big challenge for them and the team to get up to speed quickly. And to add a further curved ball into the equation the first one-hour race was held at night time! In race one Henry took over our Lamborghini Huracan GT3 Evo from Miguel at the pit stop in fourth place, and although he definitely had superior pace over the Aston Martin of Jonny Adam, the nature of the track made it extremely hard to overtake on. He tried to find a way through to get a podium spot for the remainder of the race but in the end crossed the line just 0.4s behind the Aston.

In race two the battle for Pro-Am honours was similarly tight during the first half of the race, with Henry running fourth and shadowing the Ferrari of Andrea Bertolini and Mercedes of Dominik Baumann. With the Pro drivers starting this race the plan is always to run them as far into the pit stop window as possible before changing over to the Ams, and we had this calculated very accurately to allow Henry to do as many laps as possible. Our main Pro-am rivals all came in to the pits one lap earlier than we did, and we were thus confident that this would enable us to jump some of them and get Miguel back out into the race in either third or second place. Our superior strategy then got ‘turbo-charged’ with a slice of good fortune as just as we came into the pits a Full Course Yellow period was declared, which meant our rivals on the track had to crawl round at 80kph and we jumped into the lead upon leaving the pits! Miguel then did a good job of holding off the Mercedes of Baumann’s team-mate, Valentin Pierburg, to the flag and notched up our first race win in the Sprint Cup.