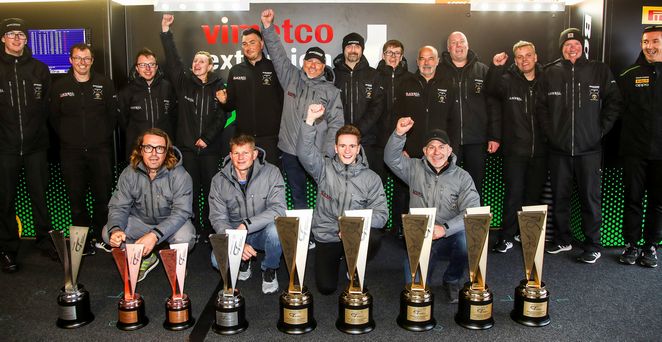 
We were finally able to get our hands on all of our 2020 Intelligent Money British GT Championship trophies last weekend, which were presented to us by SRO at Brands Hatch after the usual end-of-season official prize-giving evening was scrapped as a casualty of the Covid pandemic.

The team could thus celebrate what had been an incredible British GT season for Barwell Motorsport and all of our Lamborghini Huracan GT3 Evo drivers in 2020. We took our fourth overall Teams title, plus Rob Collard and Sandy Mitchell took our second overall Drivers title and also claimed the Silver Class crown to boot. In addition to this Adam Balon and Phil Keen secured third overall in the drivers’ standings and were the runners-up in the Pro-Am class. Rob and Sandy’s success also marked the first outright British GT Drivers Championship victory for Lamborghini.

As a few points of interest for the British GT statisticians out there… Barwell Motorsport first won the outright Drivers title with Marco Attard in 2014, which was the first for BMW Motorsport and the BMW Z4 GT3 (badged as Ecurie Ecosse). Although Leo Machitski won the 2006 British GT3 crown aboard a Barwell Motorsport Aston Martin DBRS9, back then this was a Class title as GT2 was still the leading overall category in the British GT Championship.