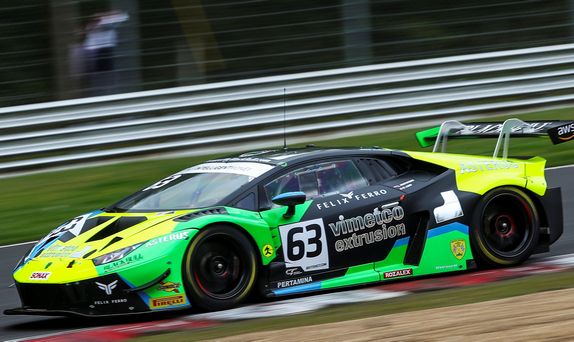 
Barwell Motorsport is currently leading both the Drivers and Teams points standings of the Intelligent Money British GT Championship, with two of the seven rounds now completed. The team has taken an impressive haul of a second place and two thirds across its two Lamborghini Huracan GT3 Evos, but actually scored the maximum points for 1st and 2nd at Silverstone as the on-the-road winner is not registered for the Championship.

It is Russian-Danish combo, Leo Machitski and Dennis Lind, who currently head the drivers’ standings after securing 3rd in round one at Brands Hatch and then the points for second at Silverstone. It was oh-so-nearly a second at Brands too, after Dennis hounded the Aston of Jonny Adam in the closing stages but just ran out of time to find a way past as he crossed the line just a few metres behind. These two have proved to be a consistently fast combination so far, and Machitski showed his mettle at Silverstone having spun on the first lap but then scythed his way back through the field to put the Vimetco Extrusion-supported Lambo right back in contention. Indeed, if it hadn’t been for their 10-second success penalty (from Brands) taken at the last pit stop, Leo and Dennis could well have taken first on the road at Silverstone.

However taking those maximum points at Silverstone were Techtrak-backed duo Adam Balon and Sandy Mitchell, after very strong pace from Adam put Sandy in a great position to challenge team-mate Lind for position in the final stint of the 3-hour race. Our two cars were on slightly different strategies which meant that with half an hour to go Dennis had track position ahead, but his slick Pirelli tyres were not as fresh as those of his young Scottish counterpart. We then witnessed a scintillating inter-Barwell fight over the closing stages, with nothing between the two Huracans as they started the last lap. As Lind negotiated the fast Becketts complex however, he was momentarily stuck behind a GT4 car, and this allowed Mitchell to get a run on him as they blasted down the Hangar straight. Sandy then pulled off an audacious manoeuvre around the outside of the Dane as they rounded Stowe corner side by side, the two cars touching very lightly but Dennis was very fair and gave him room on the exit. After Adam had been taken out of the race at Brands by a wayward rival and not scored, this result has put them right back in the frame in fifth spot in what is a very tightly contested championship. Black Bull Scotch Whisky-backed Barwell Motorsport also has a commanding lead in the Teams Championship at this early stage of the season.