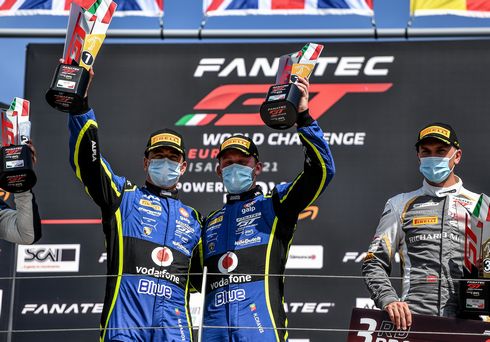 Miguel Ramos and Henrique Chaves have enjoyed successful outings in the last two GT World Challenge Europe (GTWCE) Sprint race events, claiming Pro-Am wins at both Zandvoort and Misano, aboard their Vodafone-backed Lamborghini Huracan GT3 Evo. These successes plus another podium finish in race two at the Italian track last weekend have now put them in second place in the Sprint Cup standings, and also third place in the overall GTWCE Pro-am season points (for both Sprint and Endurance rounds), assisted by their podium finish at Monza’s Endurance opener. Black Bull Scotch Whisky-backed Barwell Motorsport also currently lie in 2nd place in the Sprint Cup Teams championship and 3rd in the Overall GTWCE Teams points standings.

Both of the victories have come from the first races of each weekend, with Miguel making good starts and then moving up into the Pro-am lead during his opening stint. At Zandvoort he achieved this with a stunning around the outside pass on Louis Machiels’ Ferrari at the Tarzan hairpin. Henrique has then been taking over and showing he is able to match the pace of the established Pro drivers, safely keeping hold of the lead and securing the wins. Impressively he also managed to do this at Misano despite the car having sustained front suspension damage from one of the horrible corner exit ‘sausage’ kerbs.

The next event of the GTWCE is the ‘big one’, the 24 Hours of Spa-Francorchamps on the weekend of July 31st-August 1st, which is the most prestigious GT Endurance event of the year. Our driver line-up expands to four for the twice-round-the-clock classic, and we are delighted to announce that Leo Machitski and Sandy Mitchell will be joining us once again in Belgium. Leo and Sandy were in our Spa 24H race-winning Pro-Am car last year and have also both previously won the event with us separately in the Am Cup and Silver Cup respectively. Adrian Amstutz, who raced with the Miguel and Henrique in the Monza Endurance Cup 2021 opener, will re-join the team for the final two long-distance events of the year at the Nurburgring in September and Barcelona in October.

Euan Shand, Chairman of Black Bull’s parent company, Duncan Taylor Scotch Whisky, commented; “What a fantastic start to the season for the Barwell Team and we are very much looking forward to one of our favourite and most exhilarating races at Spa, where the team will be competing to win again after last year’s success.  We wish all the drivers the very best of luck.”