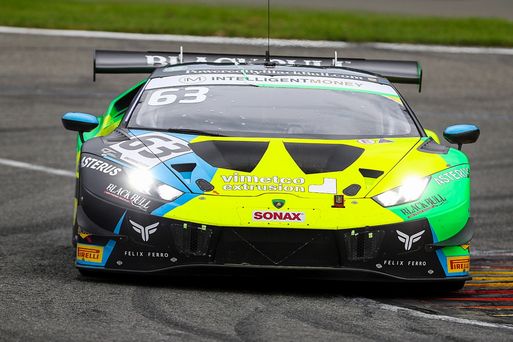 
Leo Machitski and Dennis Lind dominated the fourth round of the Intelligent Money British GT Championship at Spa on July 25, taking the first victory of the season for their Barwell Motorsport Lamborghini Huracan GT3 Evo, and moving back into the lead of the Drivers Championship points standings in the process. Team-mates Adam Balon and Sandy Mitchell also claimed a strong fifth place finish in the Belgian two-hour race, to keep them in touch in the hunt for the championship title at the half way point of the season. The result at Spa also further extended Black Bull Scotch Whisky-backed Barwell Motorsport’s healthy lead in the Teams Championship standings.

Leo qualified as the fastest of the Ams in his respective session, the Vimetco Extrusion-backed Russian posting an impressive 2m22.0s lap which put him 0.3s clear of his nearest rival. Dennis then did his job in the Pro session to give the pairing overall pole position for the starting grid with their combined times. Machitski then confidently converted pole position into the lead of the race at the start, and that was literally the last anybody else saw of the #63 Barwell Lambo for the rest of the afternoon! Leo’s pace was way too hot for the rest of the Am drivers and he handed over to Dennis with a significant gap to the second placed Aston of Andrew Howard, leaving Lind with a simple job of stroking the car home over the second hour. This he did very comfortably, but the Dane still managed to complete a clean sweep of honours for the weekend by claiming the fastest lap of the race.

The sister #1 car of Balon and Mitchell meanwhile had a much more eventful race, with Adam (fourth on the grid) doing very well at the start to avoid the literally flying Mercedes of Richard Neary which had crashed into another car, gone up in the air and landed directly in front of Balon’s Techtrak-backed Huracan! Despite being heavily delayed by this incident Adam held on to fifth place, and very quickly got himself onto the tail of the battle for third between Stewart Proctor’s McLaren and Michael Igoe’s WPI Lamborghini. He then enjoyed a great scrap with Igoe, getting past at Fagnes to take fourth place before his rival Lambo driver snuck back through on the run down to Eau Rouge from the hairpin. Unfortunately Adam lost touch with this battle after a trip through the gravel as he was pushing hard to get back past Igoe, and this left Sandy with just too much ground to make up in the second stint to move back up the order from fifth spot.

Euan Shand, Chairman of Black Bull’s parent company, Duncan Taylor Scotch Whisky commented; “The weekend at Spa never fails to disappoint and after Barwell’s success last year it was great to see another fantastic win this year for Leo and Dennis.  The Barwell team are proving to be a force to be reckoned with as they continue to push for vital points.”