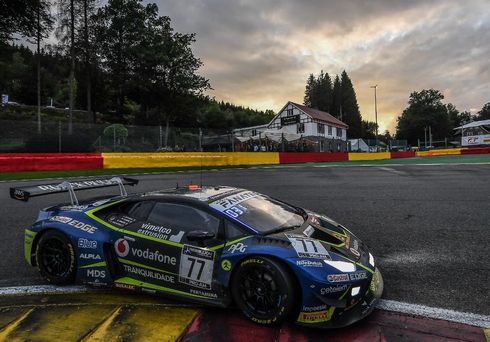 
We continued our incredible podium run in the biggest GT race in the world, the Spa 24 Hours, on July 31-August 1, when Henrique Chaves, Leo Machitski, Sandy Mitchell and Miguel Ramos claimed 3rd place in Pro-Am aboard their Barwell Lamborghini Huracan GT3 Evo. This was our ninth podium result after contesting the event for the last eight years, which has included three victories, three seconds and three thirds across the Pro-Am, Silver and Am Cup classes, and 2021 is now the fourth time in a row we have sprayed the champagne on the famous 24H podium. This result moves Miguel and Henrique up to second place in the overall GT World Challenge Europe Drivers championship, and Black Bull Scotch Whisky-backed Barwell Motorsport also moves up to second place in the Teams standings, just 2.5 points off the lead.

This year’s race threw in its usual mixture of unpredictable weather, big crashes and ever-changing fortunes and strategy calls. In a topsy-turvy opening six hours we were up and down the order like a yo-yo, as lots of different strategies and driver options were played out by the Pro-Am protagonists. We dropped down as low as 12th at one point but came storming back to lead at the quarter-distance mark and thus take the maximum points on offer at this marker point. At this stage we already had the impression that the Pro-Am class battle would have six key players, with the other five being the three AF Corse factory-run Ferraris, the Garage 59 Aston and the EBM Racing Porsche.

As the race unfolded through the night, this six became a group of five with the demise of the Aston due to a mechanical issue, and with the Porsche dropping back the Pro-Am honours would once again be fought out between Barwell Motorsport and AF Corse – a rivalry that stretches back to 2014 and our BMW Z4 GT3 days.  This time however we really had our hands full with three Prancing Horses all trying to out gallop our single Raging Bull! And they certainly all had the upper hand, with Ferrari having been very canny during the practice and qualifying sessions and not shown their true pace – as it became clear during the race that the 488 GT3 was the fastest machine on the track. Not only this, but as usual these AF Corse cars featured arguably the fastest Bronze graded driver on the planet in Rino Mastronardi in one entry, plus also a ‘derogated’ Bronze (but actually Silver) driver in each of the others. And of course Ferrari had made some very last-minute changes to one of their original line-ups, which just happened to mean they had a previously unannounced derogated driver who unsurprisingly turned out to be extremely fast… Purely just a lucky coincidence we are sure…??!!!

So this battle became more and more intense throughout the race, and we took the fight to them with some good strategy calls and by using Sandy and Henrique (who made a very confident and impressive Spa 24H debut) for the majority of the night stints, thus keeping us on the same lap as their leading car in either second or third place up until the final six hours. Also impressing during the night was Leo Machitski, who felt that he put in one of his best and most satisfying Spa 24H driving performances ever. His consistently strong pace combined with some very sold stints from Miguel also played a very big part in keeping us in the hunt for a podium.

We knew then however that in the final six hours we had more Bronze driver stint time to use up and so our main focus would be to hold onto third spot ahead of the ‘Sky Tempesta’ Ferrari that we had fought for much of last year’s race. With one hour to go we had just slipped behind them but then had Sandy ready to go back in for the final stint versus their Pro, Edward Cheever. With the heavens looking like they might open and dump a lot of rain on the circuit we made the bold move to put Sandy out on wet tyres at our final stop, and this proved decisive as a monsoon then hit Spa-Francorchamps and turned the track into a river. With the Ferrari having just changed to slicks it had to limp round on the wet circuit before it could make another pit stop to fit wets, and so we jumped ahead again, as the race then became a 30-minute straight fight to the finish after a Safety car period. In treacherous conditions Sandy was as cool as a cucumber and although Cheever closed in initially, when our tyre pressures were back up the young Scot pulled away again and was lapping on the same pace as the overall race-leading Ferrari. It was another nail-biting final hour, but in the end another very well-deserved podium.