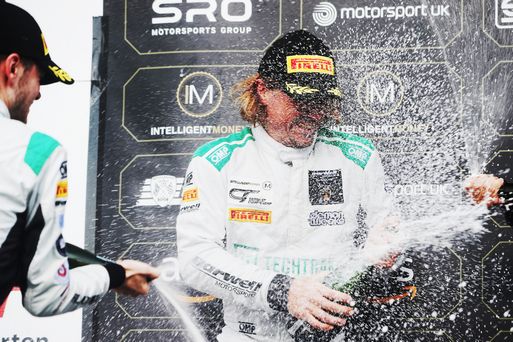 
We enjoyed a successful weekend at Snetterton on August 7-8, where rounds 5 & 6 of the Intelligent Money British GT Championship took place in extremely changeable weather conditions. The Lamborghini Huracan GT3 Evo driver crews of Adam Balon/Sandy Mitchell and Leo Machitski/Dennis Lind scored a podium finish each in the two 1-Hour races, and both of them came away from the Norfolk venue having added a healthy 30 points to their Drivers Championship standings. The net effects of these scores were that Leo and Dennis extended their points advantage slightly at the head of the table, and Adam/Sandy moved up to fourth overall and kept themselves firmly in the hunt for the title as well. Black Bull Scotch Whisky-backed Barwell Motorsport also now has a virtual stranglehold on the Teams Championship, with a lead of nearly 100 points and three rounds remaining.

Race one at Snetterton was held in dry conditions and featured some great battling from Leo and Dennis, who produced the most overtaking moves of the race in their Vimetco Extrusion-backed Huracan as they fought to overcome the 10-second success penalty from their Spa win. This culminated in taking third place on the road but getting second place points as one of the cars in front was a one-off non-points-scoring entry. Adam and Sandy had been lying ahead of them but during Mitchell’s stint his Techtrak-supported Lambo had a rear brake disc issue after it got damaged by some debris that was flicked up from the track. This presented a severe handicap to the young Scot’s progress, but he managed the problem extremely well and brought the car home in fifth place (fourth in points).

The roles became reversed in race two, with Sandy and Adam coping extremely well with tricky and changeable track conditions to take the fight to race leaders Loggie/Buurman in the Mercedes. After a strong stint from Mitchell, Balon took over the reigns and soon started to cut into the 4 seconds lead that Loggie had as he confidently negotiated the wet but drying circuit. His rival responded however, and these two engaged in a cat-and-mouse game for the remainder of the race, with the gap going up and down before eventually settling at the same 4 seconds by the chequered flag! Lind and Machitski again had a success penalty to overcome, and Leo put up a stern defence against the Aston Martin of Andrew Howard for most of his stint to claim fifth on the road and fourth out of the points scoring cars.