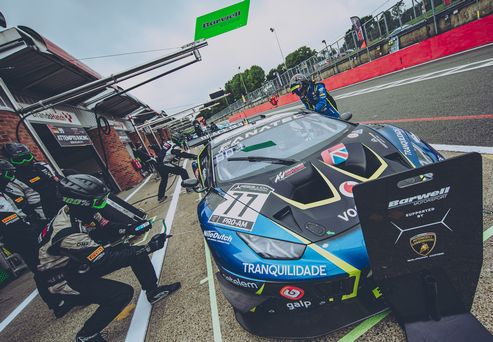 
Miguel Ramos and Henrique Chaves have enjoyed a very successful last couple of weeks in their GT World Challenge Europe Pro-Am title quest. First up came Barwell’s home event at Brands Hatch, which was round four of the Sprint Cup and then we moved directly to Germany for the 3-Hour Endurance series race at Nurburgring on September 5th.  A completely dominant performance at Brands in their Vodafone-backed Lamborghini Huracan GT3 Evo produced a clean sweep of pole positions and race victories in the two one-hour encounters of the weekend, where the Barwell Huracan was the fastest representative from the Lamborghini stable.

The Portuguese duo were re-united with Barwell’s double Am Cup champion, Adrian Amstutz, for the Nurburgring Endurance round, and after a three-month injury-enforced break from the cockpit Adrian quickly blew off the cobwebs on his return to action. Although we underperformed in qualifying and started only ninth in the ultra-competitive Pro-Am field, a strong race performance from team and drivers meant we claimed a fighting fourth place finish and in the process also beat all of our main rivals for the overall combined GTWCE season championship crown.

These results mean that Miguel and Henry now head into the final two races of the season (one Sprint round at Valencia and one Endurance at Barcelona) with a 17-point lead in the Overall Drivers Championship, whilst Barwell Motorsport has a 21-point advantage in the Overall Teams standings. We are also leading the individual Sprint Cup series and currently lie third in the Endurance points. So all to play for still in the final two rounds of the European season!