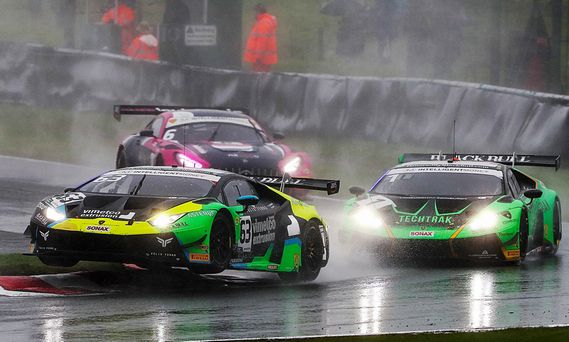 
The Intelligent Money British GT Championship visited Oulton Park for rounds 7 and 8 last weekend, and our squad of Lamborghini Huracan GT3 Evos notched up another pair of podium finishes between them. This brought our tally to eight podiums for the season so far, and also gave us an unassailable points lead in the 2021 Teams Championship – thus meaning Black Bull Scotch Whisky-backed Barwell Motorsport are the British GT Teams Champions for an amazing 6th time after claiming previous titles in 2007, ’15, ’17, ’19 and ’20!

Our driver pairings of Leo Machitski/Dennis Lind and Adam Balon/Sandy Mitchell scored a second-place finish apiece in the two one-hour encounters at Oulton Park, and backed those up with a fourth and a fifth in their other races respectively. This means that the Vimetco Extrusion-backed line-up of Machitski and Lind have extended their lead at the head of the Drivers points standings, whilst the Techtrak-supported duo of Balon and Mitchell have kept themselves in the hunt for the title in fourth position overall.

The battle for Drivers honours thus goes down to the wire at the last round of the season at Donington Park on October 17th, with five cars still in contention for both the overall crown and the Pro-Am class title.

The team’s victory was praised by Euan Shand, Chairman of main sponsors, Black Bull Scotch Whisky; "Wow!  To win 3 years in a row and for a 6th time is an incredible result.   We’re proud to have supported the Barwell Motorsport team and drivers and this shows that their hard work and perseverance has paid off.  Naturally, we raised a very large dram of Black Bull whisky to celebrate.”