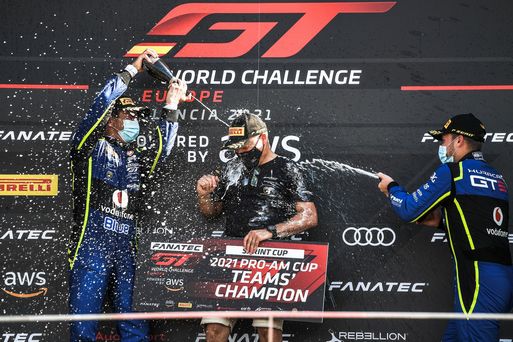 
Miguel Ramos and Henrique Chaves have won debut Drivers and Teams GT World Challenge Europe Sprint Cup championship crowns for themselves and Barwell Motorsport respectively, having taken a pair of podium finishes in the final event at Valencia on September 26th aboard their Vodafone-backed Lamborghini Huracan GT3 Evo.

There were still four driver crews and teams in with a chance of taking the titles prior to the Spanish round of the Sprint series, but if we could score a victory in the opening 1-hour encounter at Valencia then this would have been enough to put us out of reach of our rivals. As it was we came agonisingly close to achieving this, as Henrique fought tooth and nail to try and pass the leading AF Corse Ferrari of Andrea Bertolini in the latter stages of the race. Although he just couldn’t find a way past without it being a risky manoeuvre, second place meant that we only needed to finish the final race of the day to secure the championship titles.

A third place in race two meant that it was mission accomplished for the Portuguese duo, with Black Bull Scotch Whisky-backed Barwell Motorsport thus claiming our second Teams championship title of the year to add to our British GT spoils. Miguel and Henry came within a whisker of also being crowned the Overall GT World Challenge Pro-Am champs at Valencia, but victory in the second race for the SPS Automotive Mercedes of Valentin Pierburg and Dominik Baumann just about kept their slim hopes of challenging us alive. However we have a 24.5-point lead going into the final 3-Hour Endurance race at Barcelona, which means that the Mercedes crew must win the race with us non-scoring in order for them to stop us claiming the overall title. The AF Corse Ferrari and Garage 59 Aston Martin squads are now out of the running in the points standings.