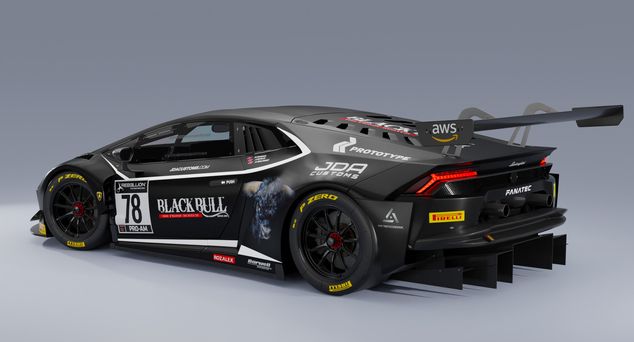 
Reigning Pro-Am Cup Champion, Barwell Motorsport, has announced the first of its two line-ups for the 2022 Fanatec GT World Challenge Europe Powered by AWS season, as it targets further success in the Endurance Cup after an incredible 2021 campaign. This year the Surrey, UK-based team will be challenging for honours in the Endurance series’ new Gold Cup class, which features cars with Bronze-Silver-Pro driver line-ups.

This Black Bull Scotch Whisky and JDA Customs-backed Barwell Lamborghini welcomes an exciting new trio to the team. Bronze driver Alex Malykhin is set to make his GT World Challenge debut in the Gold class, following an outstanding first full year of racing in 2021, in which he claimed multiple podiums and three wins during the season and also finished as vice-champion in the Porsche Sprint Challenge GB Amateur class.

Malykhin will be joined in the #78 entry by James Dorlin and Ben Barker, both of whom bring sportscar experience to the line-up. Former Porsche Cayman Sprint Challenge Champion Dorlin has already competed in British GT in the GT4 class and makes the step up to GT3 for the first time this season, while the hugely experienced Barker is a four-time Bathurst 12 Hours winner and has spent the past six years in the FIA World Endurance Championship, predominately in the hot seat of a Porsche. Although this will be his first time in a Lamborghini, he recently got to grips with his new mount after a positive two-day test at Circuit Paul Ricard in the south of France.

In addition to their Endurance season programme, Alex and James will also contest two rounds of the Sprint series, the first on their home turf at Brands Hatch in May and then at Valencia in September. This will mark a return to the Sprint championship for Barwell, having claimed the Pro-Am title last year with Miguel Ramos and Henrique Chaves.

Barwell Motorsport will once again be supported by our long-term partner, Black Bull Scotch Whisky, taking its support for the team into a fifth consecutive season. Additional support comes from Christophe Duchamp watches and Rozalex. Details of the team’s second full-season GTWCE Endurance entry will be announced very shortly.

Mark Lemmer, Barwell Motorsport Team Principal: “It’s exciting for us to have three new drivers joining Barwell, and whilst Alex and James are both new to racing at this level they will be able to accelerate their learning rapidly with the help of Ben and the team. They have shown promising pace so far in testing and we are sure that the new Gold Cup class will be a big success, so hopefully we can add a new one to our previous titles in the Silver, Pro-Am and Am Cups !”

James Dorlin: “It’s a privilege for me to have this opportunity with Barwell Motorsport in GT World Challenge. I’m new to GT3 racing but absolutely ready and cannot wait to compete against top drivers on some of the best circuits in Europe! The Lamborghini is a proven winner and our aim is to do just that in 2022!”

Ben Barker: “I’m excited for this season, for me to drive something other than a Porsche brings a new challenge I am totally ready for. We have a competitive line up with a hugely experienced team. I can’t wait to race.”

Euan Shand, Chairman of team sponsors Black Bull Scotch Whisky said; “Our commitment to Barwell Motorsport continues for the 5th year in a row.  The car’s livery looks fantastic and it’s a great way for us to increase awareness of Black Bull Scotch Whisky in this arena, as we export our whisky globally.  After a stellar result for the team last year, we are really looking forward to the season ahead and would like to take this opportunity to wish the team and the drivers the best of luck for 2022.”