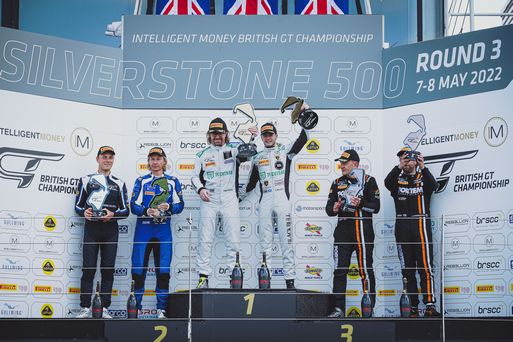 Following a valuable test session on Friday afternoon, Mitchell clocked the fastest GT3 time around Silverstone during Free Practice 2 and carried that form over into qualifying, where he beat his own time and set a new qualifying lap record. The Scot’s dominant performance combined with Balon’s superb efforts in the tight Am driver session - in which he was only a mere thousandth off third spot - to secure pole position for the biggest British GT race of the year.

The opening stint of the three-hour contest had Balon controlling the rolling start and making a great getaway as the lights changed to establish an early advantage. The Englishman continued to lead the early laps until he was nudged wide at Club Corner by the #32 Redline Lamborghini, after which he focused on maintaining his rhythm and staying out of trouble. His decision was rewarded as the earlier contact brought a penalty for the #32 and Balon retook the lead ahead of the first of three mandatory pitstops.

Mitchell held onto the lead as he emerged from the pits, navigating traffic and racing against the late Am pitters, before handing the car back to Balon after an impressive stint, having established a lead of just under five seconds.

Following a second swift pitstop by the Barwell team, Balon was back on board the #72 BlackBull-backed Lamborghini, but was repeatedly frustrated by slow-moving traffic. Nevertheless, he delivered a more than respectable stint, crucially repeating the strong pace he had shown in qualifying to keep within striking distance of the #88 Garage 59 McLaren, contributing massively to Mitchell regaining the lead at the next pitstop.

Approaching the final segment of the race, Lamborghini factory driver Mitchell set a personal best lap, cutting the gap to the leader to ensure he would sweep ahead of the McLaren before it emerged from its final pit-stop.

Leaving Silverstone, Balon and Mitchell lead the provisional Drivers’ Championship whilst  Barwell Motorsport similarly sit at the top of the Team’s standings heading to the third round at Donington Park (27th-29th May).