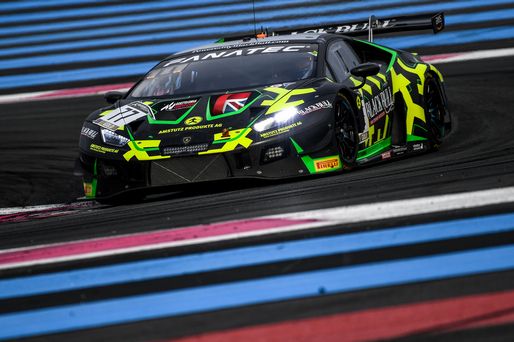 Barwell Motorsport fought tenaciously for a Fanatec GT World Challenge Europe Powered by AWS podium at the Circuit Paul Ricard 1000kms before ultimately being denied a share of the silverware.

The Surrey-based team was a top three prospect throughout the six-hour event — which ran deep into the night at the technical French venue — after a great overall performance in the highly-competitive Gold Cup class.

The weekend started promisingly, with the #77 Lamborghini Huracan GT3 Evo taking seventh in class after a qualifying session in which Rob Collard — rated as an Am driver — more than held his own against more highly-regarded rivals in support of co-drivers Sandy Mitchell and Alex MacDowell.

Collard also took the start of the race at 6pm local time on Saturday evening, immediately taking the distinctively-liveried Lamborghini from seventh to fourth in class on the opening lap. Although the Barwell entry then moved up and down the order throughout his 40-minute stint, the car was back in P4 by the time of its first scheduled pit-stop.

Unfortunately, with Collard being taken ill during his time in the cockpit, Barwell was forced to shuffle its driver strategy, sending MacDowall out earlier than planned. Putting his head down, the former Silver Cup champion raised the #77 to second in class by the end of hour two, which ended under a full course caution. With the need to keep Collard's remaining driving time to a minimum, the team was forced to leave MacDowall out longer than it wanted, only for the mandatory pit-stop to then coincide with race officials deciding to switch to a full safety car period which held Mitchell at the end of the pit-lane for a crucial 30 seconds after he had taken over the controls.

Having entered the pits as leader in the Gold Cup category, the #77 now rejoined a lap down on its competition, although Mitchell immediately set about cutting into the deficit as night began to fall. By the race's half-distance point, the Lamborghini factory driver had returned the Barwell entry to second in class during the pitstop cycles before handing back to MacDowall, who maintained the position despite his stint being marred by a tyre problem.

With the #77 running out of sequence with its main rivals owing to Collard's earlier-than-expected first stop, the Barwell entry was fourth in class when Mitchell handed over to his medically-cleared team-mate for a 45-minute run to the chequered flag. Collard then negotiated the chaos of a late-race safety car period to bring the car home sixth in class and 22nd overall.

Barwell Motorsport now turns its GTWCE attention to the TotalEnergies 24 Hours of Spa over the weekend 30-31 July.