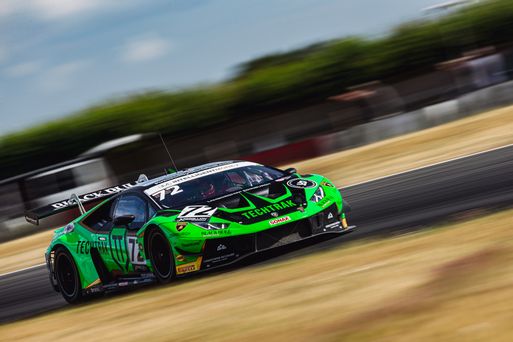 
Barwell Motorsport enjoyed a positive trip to the East of England last weekend, narrowly missing out on victory but securing an impressive haul of points and the fastest lap in race two with its Techtrak/Black Bull Scotch Whisky supported Lamborghini Huracan GT3 Evo Returning to the circuit where they had enjoyed previous success when scoring second and third place finishes in 2021, the team arrived in Norfolk for the fifth and sixth rounds of the Intelligent Money British GT Championship straight off the back of a two-day test at Spa-Francorchamps, and carried momentum into the weekend by putting the #72 Lamborghini Huracan GT3 Evo at the sharp end of both practice sessions ahead of qualifying. The two-race format had Adam Balon setting the grid for race one, and his first flying lap placed the #72 third fastest, remaining close to provisional pole on the timing screens until the end of the 10-minute session when it settled into a strong fifth. Sandy Mitchell then echoed Balon’s great pace by also claiming fifth position as the highest place Lamborghini in the second session.  The first contest saw Balon line up tenth on the grid due to taking a five-place penalty, but a superb getaway immediately gained two positions before he settled into a rhythm that saw him catching further rivals ahead. A lengthy fight with John Ferguson ended abruptly as the RAM Mercedes spun on its own at Murrays just ahead of the pit window and, with a little room to breathe as half-distance was reached, a clean pit-stop by the Barwell crew swiftly returned Mitchell to the track. As one of the fastest cars on track, the Scot soon found himself in a three-way battle for fifth place but, despite producing a mega effort that cut the gap to a mere 0.2s through the second half of the race, the #72 eventually crossed the line in sixth position.
Race two looked more promising with Mitchell starting on the third row of the grid. The Scot quickly set himself up for a bold move around the outside of Callum MacLeod at Montreal. The turn two pass paid off, promoting the Barwell car to second on the road and, from there, Mitchell continued to excel, setting the fastest lap of the race, and cutting the gap to the leading Mercedes from 7s to 3s as the pit window opened.  Another slick stop by the Barwell team then put Balon out in perfect position to contend for the win, and the Briton responded by immediately lapping quicker than Ferguson in the leading car. Although he pulled everything he could out of the car while attempting to navigate a way past the GT4 traffic, time eventually ran out on the #72 leaving it to claim the second step of the podium only 0.3s behind the winner. These results put Balon and Mitchell fourth in the championship standings and in contention for the overall title with three rounds remaining. The British GT Championship now takes a short break before heading to a crucial double-header at Spa-Francorchamps.