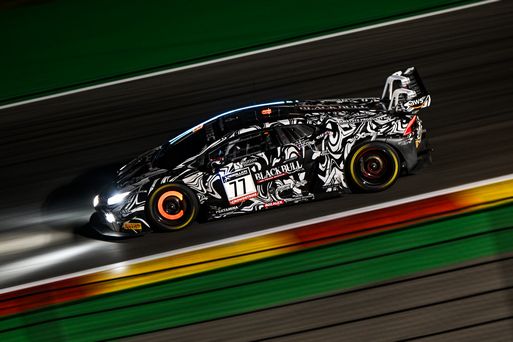 
At this year’s Spa 24H we were going for a fifth podium finish in a row, having claimed class victories in 2018 (Am Cup), ’19 (Silver Cup) and ’20 (Pro-Am Cup), and then a third place in Pro-Am last year. With a strong driver line-up in our Black Bull Scotch Whisky/Amstutz Produkte-backed Lamborghini Huracan GT3 Evo of Ahmad Al Harthy, Alex MacDowall, Sam De Haan and Sandy Mitchell contesting the new Gold Cup class we were confident of achieving this going into the event.  This confidence was further bolstered after we secured a very strong Gold Cup pole position in Qualifying, taking the scalps of many Pro cars along the way. However during the 16th hour, whilst once again in contention for a podium finish, we suffered an extremely rare terminal issue as the engine seized up and put us out on the spot.

Sandy took the race start for us on Saturday afternoon, and immediately settled into a great pace as he sat on the back of the train of the top 25 leading cars back from the overall race leader, and in a comfortable Gold Cup class leading position. Indeed such was his pace that he looked set to move further forward as his hour-long stint unfolded, but we then suffered our first unlucky blow towards the end of his run as the Barwell Lambo picked up a puncture literally as Mitchell had just started a lap. He then had to crawl round the rest of the 7km track to get back to the pits for the car to be serviced with a new healthy set of Pirellis. This was a key feature of this year’s race as a significant number of rear tyre punctures seriously affected the races of many of the Lamborghini and Audi runners.

This cost us a huge amount of time, dropping the car all the way back down to 13th in class and a lap down on the leader. We then staged an epic come back performance over the next 14 hours, combining great pace with some very smart strategy decisions to claw our way back up the order. Despite suffering another puncture when Alex was at the wheel, we took advantage of a full course yellow period to complete our mandatory brake change pit stop, and emerged from the night time in fourth place. With our strong pace and impressive stints from Ahmad, Alex and Sam continuing into Sunday morning we were catching the second and third place cars and had a very good shot at continuing our top three podium run with nine hours remaining to the finish. Unfortunately the engine had other ideas though, and after an incredible run of reliability over the last seven years this was a bitter pill to swallow, but sometimes lady luck is just not on your side. We did have the small consolation however, of Sandy having the fastest average race stint of all the Lamborghini cars and also in the Gold Cup class.